Korea has work to do after loss

Korea has work to do after loss 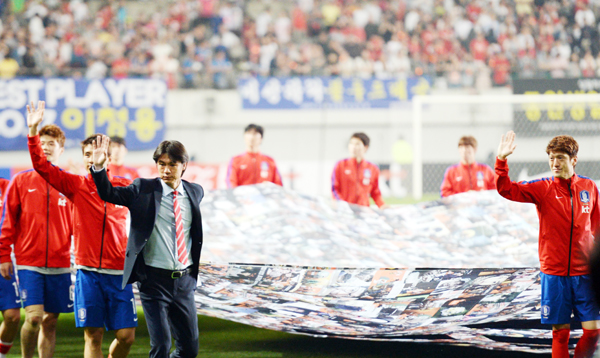 It’s only about three weeks until the kickoff of the 2014 Brazil World Cup, but the Korean national football team has lots of problems to fix if it wants to reach its goal of making it to the quarterfinals.

In a friendly match against Tunisia held at 8 p.m. Wednesday at Seoul World Cup Stadium, the Taegeuk Warriors lost their final home rehearsal before the World Cup 1-0 after failing to create scoring chances due to poor passing between midfielders and forwards. The midfielders failed to overcome their opponents’ aggressive pressure, and passes from midfielders to attackers were so inefficient and inaccurate that striker Park Chu-young was left isolated. He could do nothing, making it look as if he was out for an evening walk in the park in front of 57,112 attendees who expected to see a good start before the team flies to the battlefield in Brazil.

Early in the first half, the Taegeuk Warriors led the match, putting pressure on the Tunisian midfield. Ki’s defensive midfield partner Han Kook-young made many dirty tackles to intercept the ball so Ki could pass to the attackers, which worked well until the 20th minute with possession at 70 to 30 percent. 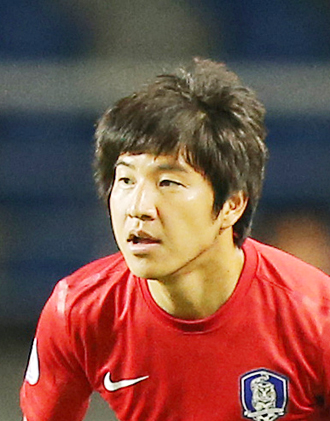 But in the 44th minute, Korea conceded a goal as Tunisia’s forward Zouheir Dhaouadi put the ball into the net off his left foot when defenders and midfielders in the penalty box area failed to clear the ball. Defenders Kim Young-gwon and Lee Yong could not match the Tunisian’s speed as he entered the box. Korea has spent a lot of time developing a solid defense at the National Football Center in Paju, northern Gyeonggi, as Coach Hong Myung-bo considers it the top priority for success in Brazil. But on Wednesday the defenders were like an automatic sliding door as they made way for opponents whenever they came into the defense area.

“I want to let fans know that the players aren’t in their best condition physically because they have had a series of difficult training sessions to improve their stamina,” Hong said in a post-match interview. “They will be 100 percent ready in time for their first match against Russia [June 18].”

Another problem faced by the defenders was that they lost their key center, Hong Jung-ho, in the 57th minute as he was replaced after sustaining a left ankle injury when he clashed with Issam Jemaa. The Korea Football Association yesterday said the defender’s injury isn’t serious and that he will be able to play in Brazil.

Coach Hong has not spent much time on his offense at Paju as he is confident with his attacking choices. But against Tunisia, the team lacked a central attacking midfielder who could overcome opponents to distribute passes, rendering the great speed and fancy dribbling of sideline attackers Son Heung-min and Lee Chung-yong useless. The role was supposed to be filled by the team’s 25-year-old captain Koo Ja-cheol, but he not only failed at the position, but also as captain because there was no encouragement or communication on the field. Fans will be missing their retired captain Park Ji-sung if Koo can’t perform better.

“I feel very sorry for the fans because it obviously wasn’t our best performance,” said Koo. “What I can promise for now is that we will play better in Brazil.”

Striker Park Chu-young and left-back Yoon Suk-young were considered the most questionable players when the coach announced his 23-man roster, and they failed to impress against Tunisia. Park was often isolated on the offense line, and in 75 minutes he only attempted one shot on goal in the 48th minute.

Yoon, whose role is to make an accurate cross from the left side to the attackers, looked like he was passing to teammates on the moon as his attempts flew a mile beyond the goal post and into the stands. There is still controversy about Yoon being included on the team because he didn’t play many matches with his club in the past season.

After the depressing match, the KFA said yesterday that defender Kim Jin-soo, a rival for Yoon’s position, has been replaced with Park Joo-ho of FC Mainz because Kim has not recovered from a left foot injury. It was a huge surprise to fans and analysts that Hong chose Yoon over Park simply because Park had a minor injury on his right foot from, which he recovered from.

Some have said that Hong decided to ring Park after Yoon’s disappointing performance against Tunisia.

“We decided to bring Park in because his condition is better than Kim’s,” KFA physician Song Jun-seob said at a press briefing yesterday. “Park is now able to wear his football shoes and is capable of running, but he still needs careful treatment because the disease can relapse.”

The Taegeuk Warriors will fly to Miami today and will play their final friendly match against Ghana on June 10 before they fly to Brazil the next day.