George has 37 as Pacers force Game 6

George has 37 as Pacers force Game 6 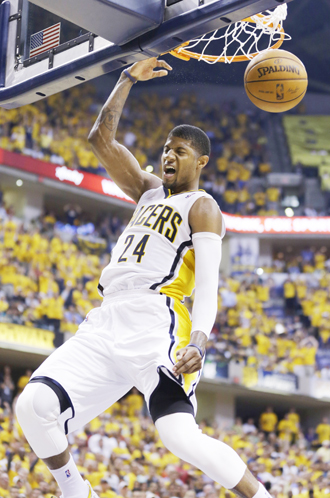 Indiana Pacers forward Paul George dunks against the Miami Heat during the second half of Game 5 of the Eastern Conference finals on Wednesday in Indianapolis. The Heat lead the series, 3-2.[AP/NEWSIS]

The Indiana Pacers, with Paul George spectacularly leading the way, staved off playoff elimination with a pulsating 93-90 victory over the NBA champion Miami Heat in Game 5 of the Eastern Conference finals on Wednesday.

All-Star forward George contributed a game-high 37 points, along with six assists, as Indiana made the most of home court advantage to cut Miami’s lead to 3-2 in the best-of-seven series.

“I just felt it. I felt the rhythm. I had to be aggressive,” George told ESPN television in an interview after scoring 31 of his points in the second half. “I tried to come out and be aggressive to start this game off and I was getting looks. I got hot.”

“We just played,” said George after Indiana came back from an 11-point deficit early in the third quarter. “Our backs are against the wall right now. That’s the only thing we can do, is come out and play.

“We were in a position where if we lost this game, we’re going home. I think that was at the back of everybody’s minds. It was a great evening.”

The Heat, seeking to win a third straight NBA Championship, were narrowly outshot by 47 percent to 45 percent from the field with an out-of-sorts LeBron James held to just seven points on two-of-10 shooting after running into foul trouble.

“We overcame one heck of a shooting performance by the Heat,” said Pacers Coach Frank Vogel. “The threes that they were making in the second half, it was just ridiculous. We were still able to prevail.”

Miami began the game with a cold shooting display and Indiana, with their starting five all scoring effectively, raced into an early 20-12 lead before ending the first quarter with a 22-16 advantage.

James ran into foul trouble early on and was penalized for a third time midway through the second quarter, but sharp-shooting veteran Ray Allen came off the bench and sparked a Heat revival as the visiting team moved ahead 42-33 by halftime.

A Lewis 3-pointer, his fourth of the game, put Miami 11 points clear four minutes into the third, but Indiana stepped up their defense to regain control and, with George finding his range from beyond the arc, entered the fourth with a 64-57 lead.

The Pacers appeared to tighten their grip on the game, George pouring in another 3-pointer and then grabbing a steal off a poor James pass for a slam dunk to give his team a 77-66 cushion.

But again the Heat hit back, an unbroken 9-0 run trimming Indiana’s lead to 77-75 before a spectacular James 3-pointer, with just under four minutes left, tied the game at 81-81.

George, ice-cool when the pressure was at its most intense, responded with two 3-pointers of his own to put the Pacers ahead 91-87 with 46.7 seconds left and the home team held on to stay alive in the playoffs.

The series shifts back to Miami for Game 6 on Friday when the Heat can clinch the Eastern Conference title for a fourth successive year with a win.

“It’s going to be a totally different ball game but we have got to rise to the challenge,” George said.