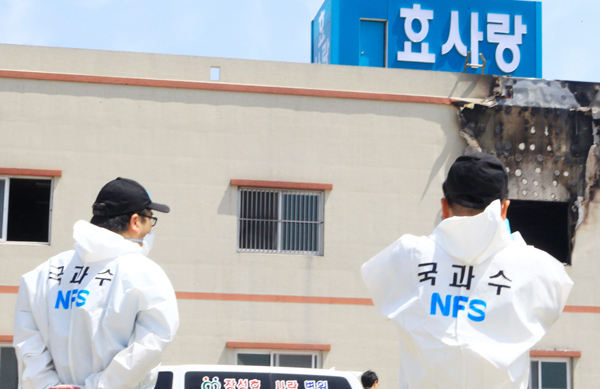 Workers from the National Forensic Service inspect Hyosarang Hospital in Jangseong, South Jeolla, yesterday. Police yesterday raided the private hospital for chronically ill patients, where a fire killed 21 and injured eight on Wednesday, to see if lax management contributed to the tragedy. By Oh Jong-chan

Police yesterday raided the private hospital for chronically ill patients in Jangseong County, South Jeolla, where a fire killed 21 and injured eight on Wednesday to see if bad management contributed to the tragedy.

The South Jeolla Police Station dispatched a group of investigators to the long-term care hospital for seniors suffering from Alzheimer’s Disease, strokes and other conditions, to confiscate evidence. Earlier, the staff of the hospital had refused to surrender any records to police and demanded authorities return with a court-issued warrant, which they did.

Police had already found there was only one auxiliary nurse on duty watching 34 patients when the fire broke out in a storage room on the second floor of the annex of the hospital.

The fire killed 20 patients and the nurse, and injured eight. Police said most of the victims died of smoke inhalation.

Police were focusing on whether the hospital had a responsible shift system for nurses and other staff taking care of the senior patients and a proper fire protection system. They were also looking into whether there was any misbehavior by the staff in its management of patients.

Some relatives of those killed claimed the staff overmedicated patients and that some doors in the building were locked when the fire broke out, preventing escape. Some also argued that patients with mental problems were confined to their beds, which may have prevented them from escaping.

The 81-year-old patient who is suspected of starting the blaze will be questioned again, police said.

The man, allegedly suffering from a mental condition, was caught on security cameras leaving his room and entering the storage room before the fire, police said.

The suspect admitted he went into the storage room but denied setting the fire, police said.

Autopsies will be conducted on all 21 victims, police said, to figure out whether there were other causes of death, such as overdoses of tranquilizers.

A group-mourning altar has been set up at a gymnasium in the county. But the families continue to demand an official apology from the hospital for lax safety measures and are refusing to hold any funerals yet.