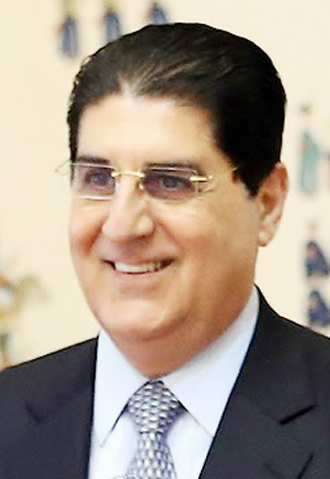 Lebanon’s Ambassador to South Korea Jad Saeed El-Hassan was killed in a mysterious car accident inside Namsan Tunnel No. 3 soon after noon in central Seoul yesterday.

The 60-year-old Lebanese envoy was driving his Hyundai Genesis through the tunnel in Yongsan District when he rear-ended a Hyundai Equus around 12:08 p.m., according to the Yongsan Police Precinct.

El-Hassan died en route to a hospital in an ambulance.

Two people in the Equus - including a 65-year-old woman and her passenger, a 53-year-old man - are currently receiving treatment at Seoul National University Hospital, according to police.

An official at the Lebanese Embassy in Korea confirmed El-Hassan’s death by phone, adding, “He was going in the direction of City Hall and he had an accident in the tunnel.”

The embassy official, who asked not to be named, also confirmed El-Hassan was driving alone in the car.

Police said El-Hassan appears to have driven some 30 meters (98 feet) into the tunnel before rear-ending the Equus, and that there was a second collision against a drainage pipe and the tunnel’s wall. His airbag opened and burst, said officials.

Police and fire officials said they are investigating the accident through CCTV footage from within the tunnel.

El-Hassan’s body is at Inje University Seoul Paik Hospital in Jung District. The embassy has not indicated funeral plans yet but said further information would be revealed soon.

Traffic was halted around the tunnel for 90 minutes after the accident.

El-Hassan was involved in a hit-and-run accident in Itaewon last September.

After rear-ending a car driven by a 33-year-old woman surnamed Jeong, Yongsan police said El-Hassan sped back to his embassy in his Hyundai Genesis. Jeong did not file a complaint.

The ambassador took the Seoul post in April 2013. A career diplomat, he previously served as ambassador to the Czech Republic and a director general of international affairs in Lebanon’s Ministry of Foreign Affairs.

He filled in as ambassador to Seoul for two months in 2010 when the top Lebanese envoy to Korea was away for summer vacation. He requested a post in Seoul after this experience.

He is survived by a wife and two sons, who are not in Korea.