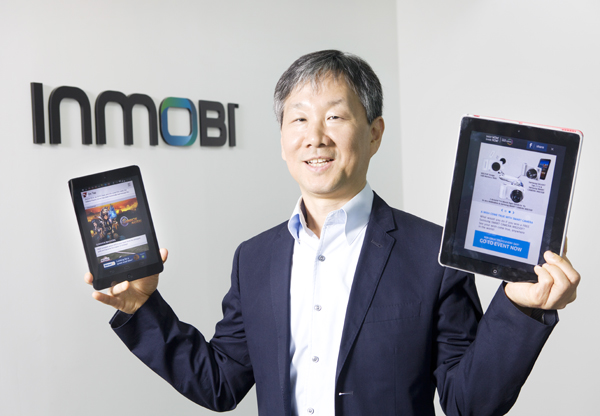 Kim Dae-sun, general manager of InMobi Korea, shows the company’s mobile ads, which are published on apps. By Park Sang-moon

Since launching services in Korea in 2011, InMobi, the world’s largest independent mobile ad network, has seen 200 percent year-on-year growth in the region for the past two years.

Kim Dae-sun was made general manager of InMobi Korea last November due to his former experience as a country manager at Yahoo Korea and Overture Korea.

Kim, who has worked in advertising for more than 20 years, is determined to lead the mobile advertising market by developing new trends.

“We have aggressive plans to expand business in the Korean mobile advertising market as well as our current outbound mobile ad business that helps Korean companies expand their businesses globally through mobile ads,” said Kim.

Q. How does mobile advertising work?

A. Basically, for online advertisements, there are media such as Naver and Daum, advertising agencies that create ads and clients, or advertisers. It is the same for any type of advertisement. For instance, if Samsung Electronics wanted to create a TV commercial, Samsung, as a client, would order a TV advertisement from an ad agency such as Cheil Industries, which will create the ad and run it on TV stations such as KBS, MBC and SBS.

In the traditional online advertising market, there are two types of ads: display ads that often come in a banner format and search ads.

Mobile advertisements are the same. There are display ads in banners at the bottom of mobile apps and there are search ads on mobile web portal sites.

When users click on the banners, they are immediately connected to the app store to download certain apps, or to mobile websites that advertisers have created to get users to participate in an event or purchase their products and services. Lately, there has been an increasing number of clients who wish to advertise on mobile platforms as mobile traffic increases.

For mobile ads, the media or the publishers are mobile apps, which have “inventories” that include advertising columns at the bottom of the screen, display banners and search ads. InMobi is like an ad agency that creates mobile ads and publishes them on these mobile apps.

Why is InMobi called a mobile advertisement network?

Unlike Facebook or Twitter, InMobi does not have its own inventory or a medium to publish ads. However, InMobi has a huge network of mobile apps worldwide, such as news apps, game apps and weather apps that have inventories to publish mobile ads.

Since we are a bridge between these mobile ad publishers and advertisers, when advertisers request a mobile ad from us, we secure a huge amount of mobile ad inventories through our global network. Out of the inventory that we have, advertisers can choose which apps they want to publish their ads on.

The reason why we are the global No. 1 independent mobile ad agency is because unlike Google, Facebook and Twitter, which run advertisements on their own media and inventories, we are affiliated with mobile apps in 165 countries. Google has a similar service called AdMob, but it is based on Google’s own inventories, even though it also makes contracts with mobile apps [publishers].

InMobi was recognized by the MIT Technology Review as one of the top 50 Disruptive Companies of 2013 and, in 2011, Japan’s Softbank invested $200 million in the company. We expect that InMobi will continue to expand on the 800 million app users we already have worldwide.

InMobi is also known for creating and publishing native ads. What is native advertising?

Native advertising is a relatively new concept. Native ads is a form of advertising that is tightly interwoven within social media, news and websites so that they are promoted in a way that people cannot easily distinguish if they are advertising or information. They often appear as sponsored listings and promoted posts on social media such as Facebook and Kakao Story.

Some newsfeeds saying that your friend started playing a certain game is also a native ad of the game published on social network services. These ads do not seem like they are ads, and thus, more people click the native ads in order to get what seems like information that might interest them.

If the click-through rate is 1 percent for banner display ads, it is 5 to 7 percent for native ads. Faith in traditional digital display advertising has decreased because they simply do not work anymore with people used to ignoring them.

There is also another type of ad, an interstitial ad, which is a full-page ad that appears before the actual webpage, or at natural app transition points. Once shown, it takes over the screen until a user dismisses it and returns to the app.

The mobile market is constantly growing. Not many people turn on their desktop PC when they go home these days as they did in the past.

This means that Internet traffic through PCs is significantly declining. Now, people access the Internet through their smartphones. When we look at the current media use patterns of all ages, people still spend the most time on TV, for an average of three and a half hours daily, followed by mobile phones.

People simply don’t turn on their computers at home as much as they did before and they do not click on banners or keyword advertisements. Thus, the advertising market is moving toward mobile advertisement.

Also, for mobile search ads, when users put in certain keywords in the search portal, only about three to four results come up. Compared to PC websites, the mobile page is too small for 30 to 40 search ads. Search ads will inevitably shrink on the mobile advertising market. Therefore, InMobi is developing other types of ads such as native ads and interstitial ads that could be better suited for mobile advertising.

What is InMobi’s competitiveness?

From left: Visitors at the 2014 Mobile World Congress held in Barcelona flock to the InMobi booth. InMobi Founder and CEO Naveen Tewari delivers a keynote speech at the Global Mobile Internet Conference in Beijing in May under the theme of InMobi Native Ads. Six-hundred employees and technicians work at the InMobi headquarters in Bangalore, India, which is known as India’s Silicon Valley. Provided by the company

In terms of the number of subscribers, technologies and the network that we have with publishers, we are largest advertising network even compared to Google’s AdMob. There are only two operators in this market at the moment, InMobi and AdMob.

Since there is no Web agency that could create a mobile website for advertisers, we provide InMobi Studio which helps brand advertisers and agencies build, run and measure mobile media ads. It’s the only HTML5 visual authoring platform created specifically for the mobile marketplace.

We also have technology that provides advertisers with mobile campaign conversion tracking. The technology matches mobile ad clicks to downloads to better track and measure conversions in real time across all advertising networks and publishers.

With tracking and the use of big data we also enhance the advertisers’ return on investment.

Even though Google has its InMobi, it is based on the Google search engine. We simply have a larger network of global publishers.

How would InMobi Korea contribute to Korean businesses?

For instance, since 2011 until last year, we have helped many Korean game companies and social network services that wish to attract foreign users and globalize their businesses.

Since last year, Samsung Electronics also has been putting up global ads more actively with the launch of its flagship smartphone Galaxy S5 this year.

What is your management philosophy?

In addition, as general manager of InMobi Korea, I personally believe that teamwork, a can-do spirit and a sense of urgency are important. Since it is a fast-changing industry, we need to move quickly to respond to the changes. A positive outlook is also important for regional offices like ours, and great teamwork to communicate with headquarters is also crucial. 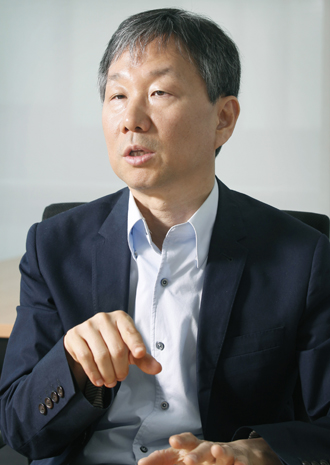 1988-1990: Master’s degree in advertising, University of Illinois at Urbana-Champaign