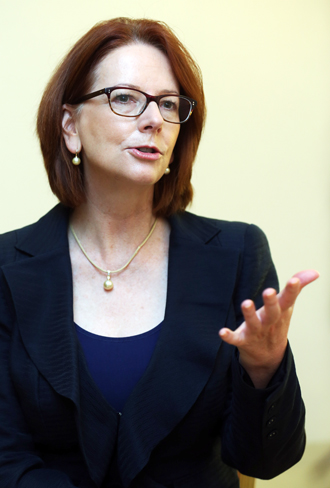 JEJU - As Australia’s first female prime minister, Julia Gillard had a checkered political career between 2010 and 2013.

She faced constant political showdowns within the ruling Labor Party, which eventually led to her being ousted from leadership in June last year.

After leaving politics, Gillard moved back to Adelaide, where she grew up, and became the chairwoman of the Global Partnership for Education (GPE), an organization dedicated to campaigning for schooling for all children.

Gillard visited Jeju Island last week to participate in the Jeju Forum for Peace and Prosperity, a three-day event that ended Friday.

The Korea JoongAng Daily sat down with the former Australian prime minister during her stay to discuss her new job, her life after politics, and the legacy she has left behind.

Q. How is your life after leaving politics?

A. I currently live in Adelaide. I was born in Wales, but my parents and I migrated to Adelaide in 1966. That’s when I was 4. So I grew up in South Australia with my family until 20. In my early 20s, I moved to Melbourne because of my role in the national student movement, and Melbourne was where the head office was. After leaving office, I moved back to Adelaide where my mother, my sister and their children live. Now we are going to welcome the first of the next generation - my niece’s son, Ethan.

How do your neighbors treat you?

I am obviously very recognizable in Australia because, you know, television would screen me day by day when I was prime minister. So I am very recognizable, and my partner, Tim, is very recognizable. But people are very respectful about privacy, but incredibly friendly as well. I think people like the fact that I moved back to Adelaide. So we are very much enjoying it.

Could you explain the main initiative of the Global Partnership for Education? What led you to be engaged in the organization?

I am now focused on education, chairing the Global Partnership for Education. The organization is aimed at providing education for children in poorer countries, refugee children and other children in harsh circumstances. Currently, 57 million children can’t afford to go to primary schools. So, I thought it’s important to make sure that they are provided with access to primary education. Among them, many are girls in rural areas. It would not be easy, but the progress in countries in Yemen and Congo shows that change is happening.

When you were prime minister, you met a number of leaders around the world. Is there any particular person who impressed you?

I very much admire President Obama for what he is doing for his own nation: major health reforms. I’ve also met Bill and Hillary Clinton. I meet Hillary more often. We talk about education, women in leadership and other political issues. Her time as the Secretary of State overlapped with the time that I was a prime minister. Since then, we’ve remained in touch. Of course, I met President Park Geun-hye, but it was former President Lee [Myung-bak] with whom I spent much time when I was a prime minister. I attended the G-20 summit and then the nuclear security summit here in Seoul. We became good friends. I admire his work.

The carbon trading scheme was one of the most controversial policies during your term. Looking back, what do you make of the scheme?

If you look broadly around the world and across Europe, many countries have adopted the carbon trading scheme without the whole lot of partisan politics. Here in Korea, obviously there have been some issues, but [the nation has] managed to move to emissions trading. In our own country, like the United States, there has been partisanship around the issue. It didn’t start off like that when former Prime Minister [John] Howard, who also spoke at this forum before, promised the scheme. But it became a very partisan and contentious issue.