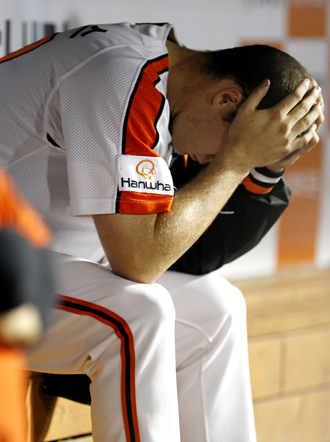 Hanwha Eagles starting pitcher Andrew Albers reacts in the dugout after he allowed five runs in four innings against the NC Dinos Thursday at Daejeon Baseball Stadium. By Kim Min-gyu

Two months into the 2014 Korea Baseball Organization season, some teams like the Samsung Lions look to be on the right track, while others like the Hanwha Eagles seem to be on the road to nowhere.

The defending champion Lions are in a familiar position atop the standings with a record of 30-14-1. The 17-29-1 Eagles are in eighth place despite being KBO’s biggest shopper in the offseason.

The Daejeon-based club shelled out more than 15 billion won ($14.6 million) for second baseman Jung Keun-woo, center fielder Lee Yong-kyu and some foreign players, yet they are just three wins better than they were at the end of May last year.

That works out to 5 billion won per win.

With a goal of improving the top of the batting order and up-the-middle defense, the Eagles spent 13.7 billion won on free agents Jung and Lee, two of the league’s best leadoff hitters.

Leading off, Lee is hitting .316 with 15 RBIs, 34 runs scored and eight stolen bases. His .424 on-base percentage (OBP) is second among the league’s leadoff hitters to Seo Geon-chang (.438 OBP) of the Nexen Heroes.

Though unable to play in the field since having surgery on his shoulder, he is expected to return by the middle of the month.

Jung, who has mostly hit either second or third in Manager Kim Euong-yong’s lineup, has had his ups and downs. Still, he is hitting .285, with three home runs, 20 RBIs, 35 runs scored and 15 stolen bases. Jung also has been solid defensively at second base.

In order to beef up their heart of the order, the Eagles also signed a one-year, $300,000 deal with former Pittsburgh Pirate Felix Pie with the expectation that he would take off like former Eagle Jay Davis, who hit .328 with 30 home runs in 1999. But the overall impact of pairing up the league’s best leadoff hitters - Lee and Jung - with the U.S. import and first baseman Kim Tae-kyun has been disappointing.

Pie is batting .308 with three home runs and a .436 slugging percentage in what has been a hitters’ league so far this year.

The cleanup spot is another area of concern. First baseman Kim has managed only two home runs and his slugging percentage has consistently decreased from .536 in 2012 to .475 in 2013 to .464 this season. Kim is the most expensive player in the KBO with an annual salary of 1.5 billion won.

The Eagles acquired two new foreign arms in the offseason - Andrew Albers and Caleb Clay. Considering the team’s weak starting rotation, expectations for the two U.S. imports were high. Manager Kim said before the season that he expected the two to be the team’s pitching leaders for the next two to three years.

“It is a waste of time waiting for the two [Albers and Clay] to pitch better,” said analyst Lee Soon-cheol. “It’s obvious that the team will not make the postseason, but they need to find new faces if they don’t want to kill their bullpen pitchers. They are not capable of pitching long innings and are not able to stop the team’s losing streaks.”