Picking up where she left off in China

Picking up where she left off in China 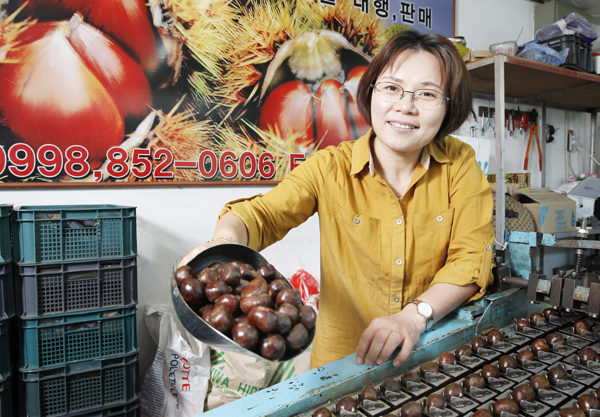 'Although the number of North Korean defectors in the South surpassed 26,000 this year, most of them struggle to adjust and very few of them made notable successes for themselves. There are so many media reports on their failures and problems that officials worry defectors will be stigmatized as incompetent parasites who can never succeed in their adopted country. The Korea JoongAng Daily is putting a spotlight on the “hidden defectors” who succeed in the capitalist South on their own and through their own ambitions and efforts and who don’t need government subsidies to show the silver lining to defectors still lost in the dark cloud of adjustment.'

When Shin Gyoung-sun risked her life to escape North Korea, she ended up in China working at a small factory. She worked up to 20 hours a day making only 300 yuan a month, the equivalent to $47.

Shin eventually got a better job and life started to look brighter, until she was caught by Chinese police and sent back home.

She was pretty sure she’d be doomed to be sent to one of North Korea’s notorious labor camps, so she fled once again. This time she set her sights on ending up in South Korea.

“Before I defected to China, I did not know what the outside world was like,” the 45-year-old Shin recalls. “I thought the entire world would be like North Korea.

“But after living in China for a few years, I realized living in North Korea was suffocating. I could not see any future or hope in my life there.”

With the help of some Chinese friends, she got a job as a Chinese-Korean translator at a trading company in Busan. But the company soon went bankrupt.

“I had nowhere to go,” she says. “Some people proposed I should become a masseuse, but I hated the idea of settling in South Korea with a job like that.

“So I decided to take over the bankrupt company,” she says. “I don’t know where I got the courage to do that. I had only 4 million won at the time.”

The courage paid off, and Shin is now one of the most successful entrepreneurs of all defectors to arrive in the South. Her Shinyoung Trading Company imports chestnuts from China, and the annual sales of her company reached 1 billion won in 2013, she says.

“I have seven regular buyers in Korea, and also receive retail orders from ordinary South Korean customers, such as housewives or elderly people who love chestnuts, through the Internet,” she says. “Our annual sales hit a peak of 2 billion won in 2012, and we now control about 30 percent of the entire chestnut import market.”

Chinese chestnuts, it turns out, are relatively easier to cook than local types.

In 2011, her nuts were a hot item on Ticket Monster, a social-commerce website. Her company also received an award from the Korea Economic Daily as one of the most successful small-size enterprises in the country.

According to the Ministry of Unification, which is in charge of North Korean defectors, Shin is one of the most successful entrepreneurs among defectors.

Shin suffered through North Korea’s notorious famine from 1994 to 1998, dubbed the “Arduous March” by the Pyongyang regime. She was 30 years old when she fled for the first time in 1999, leaving her sisters and father behind.

“My mother died of hunger in 1996 when the famine was at its worst in North Korea,” she says. “A mountain in my hometown was turned into a mass grave of people who died of hunger. It became normal for people to steal other people’s assets for survival. To get anything done, you needed to have money.

“North Korea always proclaimed the superiority of the Communist system, but the irony was that it was actually becoming the worse kind of capitalist society,” she says. “I could not see any more hope there.

“Rumors swirled that there was a better life in China.”

Without any relatives in China, she defected to Yanji, a border region, with the help of a broker. But the broker was actually a human trafficker and he sold her to a local farm in Hebei province, a northern region in China.

After a few years of working on the farm for no wages, she fled and got a job at a clothing factory in the same province in 2005, where about 200 young Chinese women were working on orders from Europe, she says.

“Among the hundreds of workers at the factory, I was the most diligent person,” she says. “I got up at 4 a.m. and worked until midnight.

“I just thought if I want to survive in China, I should learn Chinese and a particular skill,” she says. “My goal was, at the time, to settle down in China.”

Her key to survival was learning Chinese. Her reputation as a diligent, Chinese-speaking Korean worker spread to a neighboring factory in Hebei province, where the owner was exporting chestnuts to South Korea. He was looking for a Korean-Chinese translator, and gave her the chance to work.

“When I had a telephone conversation with some South Koreans as part of the interview process, I couldn’t understand their accent and some words,” she said. “But I could converse, so I got a job as the translator for the exporter.”

Her pay as a translator was much more than at the clothing factory, she says, 1,500 yuan per month, or about $237. Thanks to her diligence, she was soon promoted as a manager.

“One day, a Chinese man who had problems with me accused me of being an illegal immigrant to Chinese authorities,” she says. “So I was immediately arrested and repatriated.”

She was sent to a temporary detention camp in Sinuiju, a northwest North Korean city bordering China. After that, she was supposed to be sent to a notorious concentration camp for two years of forced labor.

“It was horrible enough at the temporary detention camp for a month,” she says. “Many repatriated defectors were getting ready to be sent to political prisons or concentration camps.

“All of the detainees were physical inspected in a naked state, which was humiliating,” she says. “The people designated political criminals were severely tortured, no matter whether they were women or children. A 15-year-old teenager died there of AIDS without receiving any medical treatment.”

She managed to bribe her way out of the camp and returned to her hometown, Chongjin, in the country’s northeast. Her family gave bribes to local authorities to keep her safe.

But she could see no hope in the Communist state, she said.

“We had no electricity except on New Year’s Day, when Korean Central Television broadcast the New Year’s message of the Dear Leader [Kim Jong-il],” she says. “I had to collect animal droppings even on New Year’s Day, ordered by local authorities, for fertilizer.

“I felt oppressed by local people as well,” she recalls. “But my family did not want to leave. They knew nothing of the outside world. They insisted on my staying there.”

Shin’s biggest reason to attempt the dangerous escape was a son who had been born in China in 2005 when she was working on the farm. She left him behind on the farm.

“If I did not have a son in China, I wouldn’t have dared to defect again,” she says.

With help of Chinese friends, she and her son safely defected to South Korea in 2008. She got a job at the South Korean chestnut importer in Busan, whom she had dealt with while working for the exporter in Hebei province. But the company went bankrupt a year later.

“Despite the bankruptcy, I found my previous employer in China still maintained connections with the company,” she says. “The problem was how to get money to keep the company going.”

Shin had only 4 million won in savings and a 5 million won government living subsidy. She applied for a government loan at a local community center for owners of small-size businesses and received a 10 million won loan.

She opened her own trading company, Shinyoung, in August 2009 with two employees: her younger sister, who defected in 2010, and the sister’s husband.

“I paid back all the loans in a year,” she says. “The timing of my start-up was good. As we had just gone bankrupt, we didn’t have any old chestnuts in our inventory.

“So we bought newly harvested, delicious chestnuts in the autumn of 2009 from China earlier than any other Korean importers, and they sold out,” she said. “The key in chestnut trading is who imports the newly harvested chestnuts first every autumn.”

“Recently, I started to take business administration classes for CEOs at Pusan National University,” Shin says. “I might be considered too old to be a student, but it was interesting. Sometimes I couldn’t understand what other South Korean CEOs were talking about, but I felt proud of myself for learning something from the successful South Koreans there.

“If you come to South Korea as a defector, you should appreciate the benefits you receive for free from the government,” she says. “Just working steadily without expecting pure luck might be the key to settling down successfully here.”