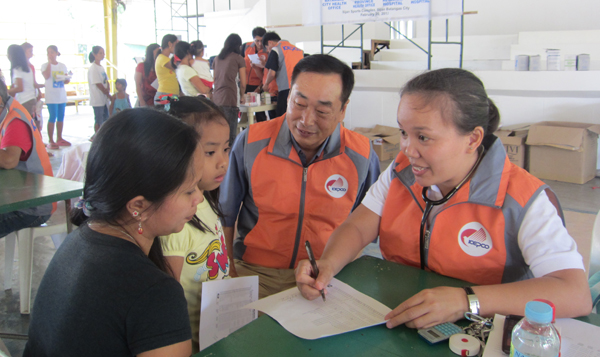 Kepco workers and Filipino medical professionals provide medical check-ups to residents near the Ilijan power plant in the Philippines. Provided by the company

The Korea Electric Power Corporation (Kepco), the country’s electricity conglomerate, is expecting big returns from its overseas construction project at Ilijan, a combined-cycle power plant in Batangas City, the Philippines.

The company has raised $540 million through project financing to help cover 75 percent of the construction budget.

The plant is based on a Build, Operate and Transfer (BOT) contract in which the company builds and operates the plant for 20 years and then hands it over to the Philippine government. In return, Kepco is provided with gratuitous land and fuel for the plant while it is in charge of its management.

The 1,200-megawatt plant started its commercial operations in 2002 thanks to a loan from the Export-Import Bank of the United States and the Japan Bank for International Cooperation. In 2013, the accumulated sales from the plant from its 11 years of operation reached $1.6 billion, and in April 2014 the company paid off its loan.

As Kepco is free from its repayment obligations, it can earn its full income until 2022, when the plant will be transferred to Philippine officials. This will help reduce the debt of running public facilities, which has been one of the company’s major issues.

The electricity generated from the Ilijan plant and other small plants in the Philippines owned by Kepco adds up to 1,400 megawatts, which is about 10 percent of the total power generation of the nation. The company is the fourth-biggest independent power producer in the country.

Kepco’s power plant management abilities are recognized by many entities. In 2003, the Ilijan power plant was selected as one of the top 12 power plants in the world by Power, an American electrical power industry magazine. It was also recognized as the environmental company of the year in 2009 by Asian Power, a Singaporean bimonthly magazine for power business in the Asia-Pacific region. The Philippine government has also given the company many awards for its achievements, such as environmental management and stable production of electricity.

Kepco is also known for its corporate responsibility activities in the Philippines. Ever since construction began in 1996, the company continued its contribution to the community. The company focused on bringing sustainable help to the town.

The power distributor has provided electricity to 760 rural areas. About $15 million used for the construction came from the profit earned in a Malaya plant that Kepco took over in 1995. Moreover, $1.54 million was invested to build basic infrastructure such as water supplies and roads in the towns near the Ilijan plant. The money was also used to help educate the citizens and provide them with medication.

From 2011, Kepco and Seoul National University have worked to build and improve children’s libraries around the Ilijan area. In 2013, the company repaired roofs and ceilings of elementary schools located near the plant and offered special classes such as music and visual arts to the students.

In addition, the company funded the Philippine Red Cross to perform surgeries on children from socially disadvantaged households for eyesight recovery. So far, four children have recovered their vision and are able to read on their own. Last year, the company decided to expand the beneficiaries from children to all residents in the area. The local staff and 20 medical professionals treated the patients.

“We will continue our efforts to strengthen and expand our business in the Philippines,” said a Kepco official.