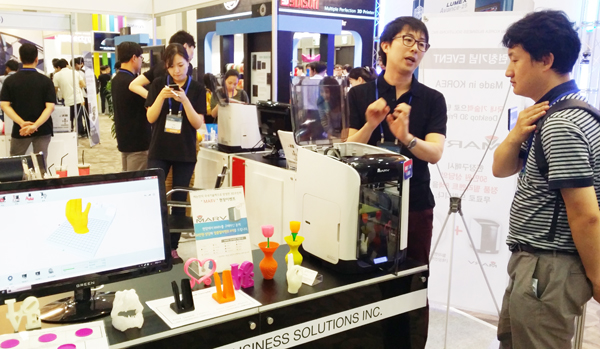 An engineer from Canon Korea Business Solutions explains how the company’s first locally developed 3-D printer for personal use works at the Inside 3D Printing Conference and Expo, at Kintex, Ilsan, Gyeonggi, yesterday. By Kim Ji-yoon

People of all ages gather around a 3-D printer as small as an espresso machine. As a thin nozzle busily sprays a corn starch-based bioplastic called PLA material, a white hand shapes up inside the printer.

It only takes an hour or two to make the replica, said an engineer from the machine’s developer Canon Korea Business Solutions. The replica was sophisticated enough to show thin lines on the palm.

“The printing time gets longer for more complicated shapes,” the engineer admits. “But this printer is perfectly fine for personal uses.”

Canon Korea, the local branch of the global printer manufacturer, unveiled yesterday its personal-use 3-D printer on the first day of the Inside 3D Printing Conference and Expo, held at Kintex, Ilsan, Gyeonggi. The printer is called Marv.

The printers have come a step closer to becoming a part of our daily lives, and the industry is finally looking into the small business and consumer market.

The new printing technique will not only be used to create prototypes for manufacturers, said Daniel Thomsen, general manager of Stratasys Korea during his keynote speech at the expo. It has vast growth potential as the era of “prosumer” approaches.

The Australian executive said Korea is one of the fastest growing markets within the Asia-Pacific market, steadily seeing double-digit annual growth rates.

Thomsen cited U.S. President Barack Obama’s remark in his State of the Union address last February: “3-D printing has the potential to revolutionize the way we make almost everything.”

Thomsen encouraged people to think outside the box about possible applications of the technology.

“The word ‘revolutionize’ in my eyes means change. We need to change our ways of [dealing with] 3-D printing, because everything you’re interacting with has something to do with 3-D printing.”

The popularity of 3-D printers is expected to grow as prices finally drop.

Lee Yong-woo, managing director of the 3-D printer business department at TPC Mechatronics, an Incheon-based midsize printer developer and marketer, said the 3-D printing market has limitless business potential because the device can be used for so many purposes depending on which material is used by the printer.

According to U.S.-based consulting company Wohlers Associates, sales in Korea of 3-D printers were about 30 billion won as of 2013, about 2 percent of the total world market.

The world market is largely dominated by manufacturers in seven countries, including the United States, Japan, Germany and China.

TPC started out as a machine manufacturer and is now developing its own 3-D printers and software in cooperation with a Daegu-based tech company called Anyworks.

Lee expected the local market will grow to 70 billion won by the end of the year.