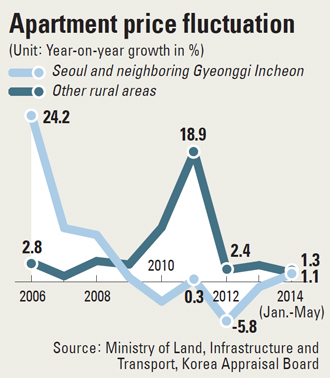 Kim Jeong-hwan, a 48-year-old Bundang, Gyeonggi, resident, was surprised recently when he looked into apartments in Suseong District in Daegu, which is considered the region’s Gangnam.

Kim has little choice but to move because the public company he works for is preparing to relocate to Daegu Innovation City, and he wants the best education environment for his children in middle school. He was thinking of buying an apartment, but the prices even in Daegu were nearly as much as in the greater Seoul area. An 85-square-meter (915-square-foot) apartment sells for 470 million won ($462,000).

“I really didn’t have any clue, especially since real estate prices in the greater Seoul area didn’t rise much,” says Kim. “But in just a year the apartment in Daegu went up 100 million won.”

Kim said he regrets not buying an apartment a year ago, and he is now considering searching for a long-term jeonse flat.

Housing prices outside greater Seoul have been rising far faster than in the capital area, where they have contracted since the Sewol ferry tragedy in mid-April. The real estate market in Seoul and neighboring Gyeonggi had been recovering since the government unveiled a stimulus plan that included tax breaks last August.

According to KB Kookmin Bank, apartment prices have been rising for 62 consecutive months in provincial areas, an extended rally that hasn’t been seen in Seoul since the early 2000s, when apartment prices in the nation’s capital surged as much as 20 percent.

A Korea Appraisal Board study showed apartment prices in the greater Seoul area have been falling in the past 10 weeks. In contrast, prices in other regions inched up 0.22 percent in April and 0.14 percent in May.

It’s not just the appreciation of apartments that has moved outside the greater Seoul area. Even real estate transactions in other regions have become more vibrant. From 2006-8, 308,000 apartments were sold in Seoul annually. However, that shrank by 28 percent from 2009-13, when 222,000 units changed hands each year. 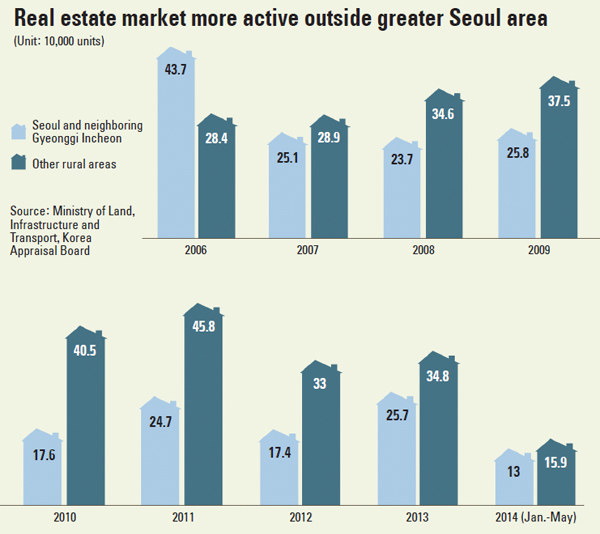 Apartments sold outside the greater Seoul area account for 63 percent of all transactions in the country today.

According to Dr. Apt, a realtor information company, 3,200 potential buyers signed up for the presale of 15,000 apartment units in the greater Seoul area in May.

Outside the capital, 65,000 people signed up for presale bidding on 10,000 apartment units, translating to six buyers for every unit.

The reason for the difference comes down to supply and demand. The Dr. Apt study showed that from 2005-8, an average of 160,000 apartment units were built each year. Since 2009, however, the number of new units annual fell by an average of 35 percent to 100,000 units. In Busan, Daegu, Daejeon and other cities, the supply shrank 40 percent over the same period.

“A bottleneck is happening in the provincial areas outside greater Seoul because while the supply of housing units has been shrinking, the number of households is growing, and there are more people who hope to change their houses,” said Park Won-gap at KB Kookmin Bank.

As construction has been more active outside greater Seoul, there is a growing expectation of economic development in provincial areas.

Major construction projects have diminished in the greater Seoul area since the global economic crisis. Provincial governments, however, have been pushing for major projects under the central government plan to create more balanced nationwide development.

Previously, major developments were centered in the capital and surrounding areas including Gyeonggi and Incheon. The balanced development plan includes creating “innovation cities” to attract high-tech businesses to relocate outside of Seoul.

About 10 trillion won has been spent on 10 innovation cities - including in Daegu and Gwangju - that are currently being developed.

“As new towns and cities in the greater Seoul area sparked the real estate market in the region before the global crisis, innovation cities have become the spark in the rural market,” said Kim Seon-deok, head of Construction Industry Strategy Research.

As apartment values in areas outside greater Seoul rise, speculation has become rampant.

In the five major cities - Daegu, Daejeon, Gwangju, Busan and Ulsan - nonresidents accounted for 35 percent of apartment purchases in 2006. Last year, it was 41 percent.

Especially in the case of Gwangju in South Jeolla, nonresidents of the region who own an apartment in the city have grown from 30 percent in 2006 to 41 percent in 2013.

“In the region, the difference between jeonse and actually buying an apartment isn’t large,” said Kang Kwon-soo, a realtor in Gwangju. “When there is a jeonse contract, the financial burden of buying an apartment gets lighter. There are people from outside [Gwangju] who purchase apartments and sell them when their value goes up.”

In the five major cities, jeonse averaged 72.5 percent of an apartment’s sale price, compared to 65.4 percent in greater Seoul.

Whether this heated trend in the provinces will continue is uncertain. This year alone, 160,000 households will move into newly constructed apartments and 140,000 next year, which could dampen future demand.

And then there’s the matter of debt. From 2009-13, there was about 11 trillion won in new mortgage loans in the areas outside greater Seoul.

“It seems apartment values in rural neighborhoods have reached their peak,” said Huh Yoon-kyung, a researcher at Construction Economy Research Institute of Korea.