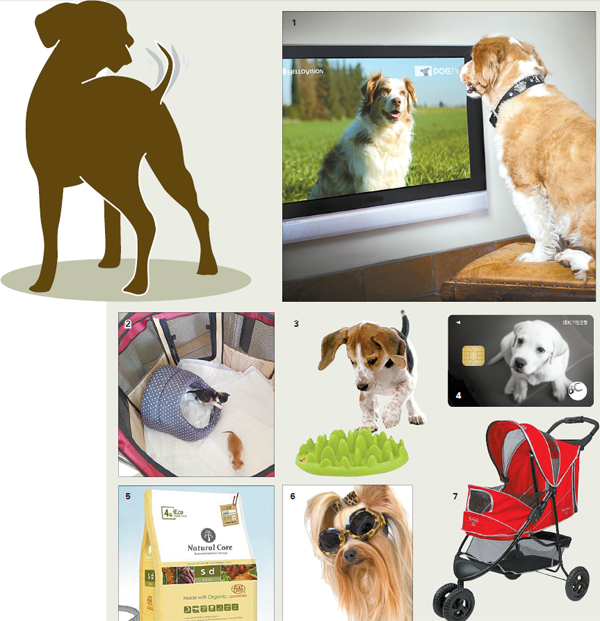 Park Mi-kyung, 29, turns on classical music for her 12-year-old dog Bobo every morning and feeds him organic food. She even gives him dietary products with limited fat and a digestive enzyme specialized for his digestive system, which has been ailing lately due to his advancing age.

After he eats, Park thoroughly brushes Bobo’s teeth and gives him a health supplement exclusively for older dogs. The spoiled canine gets a medical checkup once a year, and Park even takes him to pet exhibitions to check out the latest items.

On his birthday, Bobo gets a carbonated water bath and massage. And when Park gets off work, she and her beloved canine spend most of their evening watching the Dog TV channel.

Similarly, Ms. Chung, a 49-year-old school teacher who requested that she only be referred to by her family name, recently started sending her 3-year-old pup Mungsil to pet kindergarten. Every day before work, she drops her dog off at the school, where he was housebroken and learns social skills. A beauty treatment and snacks are included in the daily routine.

“The puppy showed emotional insecurity when left alone at home. It would turn over the trash can and eat the floor mattress,” Chung said. “So I decided to send Mungsil off to a kindergarten instead of home-schooling.” 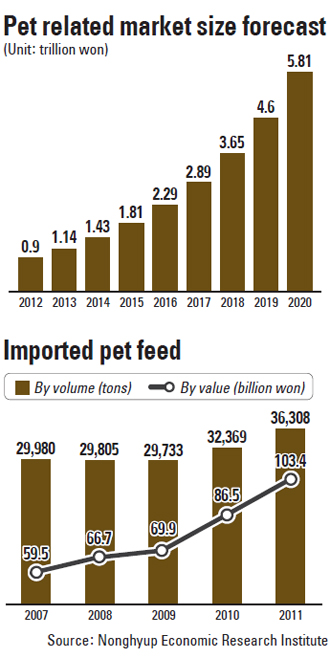 “But the teachers there write down the daily activities and keep my dog clean and well treated, which makes it all worthwhile, she added.

Park and Chung are a testament to the country’s growing local pet market, which has been picking up steam in recent years, especially as the number of older people living alone has increased. But unlike in the past when the majority of pet owners could be found in younger demographics, nowadays more older singles are seeking out pets for companionship and company.

And these new pet owners spare no expense on their animals, lavishing them with the best treats and toys.

According to a recent study by the Nonghyup Economic Research Institute, the 1.4 trillion won pet market is expected to rise to 6 trillion won in 2020, and the number of people raising cats and dogs has reached up to 10 million - or one fifth of Korea’s population.

In just 10 years, the pet products that were formerly limited to food have evolved to become much more diverse, including carbonated doggie spas, strollers and even a TV show exclusively for canines.

The nation’s first pet channel, Dog TV, owned by CJ Hellovision, was launched in February and it has steadily picked up viewers. It also airs imported programs. But the novelty of the channel is mostly that the programs aired aren’t targeted for pet owners, but the dogs themselves. Camera angles are adjusted for a canine perspective, as are the colors and noise levels. In less than half a year, viewers have exceeded 7,000.

“We air three to six-minute programs on air because dogs have a short concentration span,” said a CJ Hellovision official. “There are many cases where dogs that were emotionally insecure have found some stability since watching the shows.”

Diet products for dogs are also gaining widespread popularity. According to Auction, the online shopping website, diet regimens for canines have increased 45 percent in the last five months compared to the same period last year. Such low-calorie fare includes a chicken and brown rice dish. Other products contain special enzymes and probiotics that help enhance digestion.

A 6-kilogram (13.2- pound) bag of Natural Core Slim Down dog food costs nearly 50,000 won, and a 13-kilogram pack of Canidae diet food retails at 78,000 won. But while pet food targeted for obese pets is costly, it continues to enjoy steady growth. One product has 15 percent less fat than other pet food like Alpo, which costs 11,900 won for 1.3 kilograms.

Seeing lucrative potential in the pet market, Korean conglomerates are jumping into the competition for pet foods.

In February, CJ Cheiljedang launched high-end pet food Ofresh and is trying to expand its sales by utilizing most of CJ Group’s distribution networks, including online malls like CJ Mall.

“We have stationed our products in major retail stores where many pet owners shop,” a CJ Cheiljedang official said. “Sales are steadily growing.”

Pulmuone, another major food company, has dog food brand Amio, which is made of grain, nuts and meat without any synthetic or chemical additives.

“Until now, pet food products were nearly monopolized by imported brands,” said Kim Don-shik, the manager of the pet division at Auction. “But lately, consumers’ preference has shifted to Korean pet foods, whose quality has improved significantly.

Products for cats are getting more creative as well: Owners can purchase a hammock that can be installed under a chair, a water purifier that prevents stomach aches, a mouth washer and an environmentally friendly cool mat and omega 3 health supplement that prevents inflammation and improves the quality of a kitty’s coat.

But the most popular product among cat owners now is more traditional - a DIY wooden cat tower.

“More pet owners aren’t as focused on price increases, so demand for organic pet food and diet-related products have been steadily rising,” said Kim at Auction.

A food dispenser that prevents overeating is another popular item and costs from 30,000 to 50,000 won. One model can digitally connect to smartphones, allowing owners to monitor their pet while its eats. That one costs nearly 280,000 won. Another food tray has a bumpy surface to prevent animals from consuming food too fast and modifies eating habits in a more appropriate and healthy way.

Sales of workout toys like balls made out of natural latex enjoyed a healthy sales increase of 25 percent compared to the first five months of last year. Stairs that encourage pets to walk saw sales figures surge 75 percent from a year earlier.

Meanwhile, sales of fashion items for dogs have gone up 30 percent. Doggie sunglasses (28,000 won) and a leash that doubles as a scarf (7,000 won), as well as Superman and Batman outerwear (9,900 won) are steady sellers.

In March, fashion company LF launched a pet fashion line called Hazzy Doggie. Some of the items on its premium line for dog outerwear cost more than those for children. A checker coat retails at 100,000 won, for instance, while a winter coat costs 90,000 won.

Sales of pet strollers have shot up 145 percent in the first five months compared to the same period last year as more people take to the streets thanks to the mild weather.

There’s also a deluxe combo stroller for owners with more than two animals. And, of course, the complementary seat belt amounts to 4,500 won.

When it comes down to it, the possibilities for the pet market and related products are limitless, an industry insider said.

“There will be a growing number of products that cater to all sorts of pets,” the source added, “from dogs and cats, even to reptiles.”