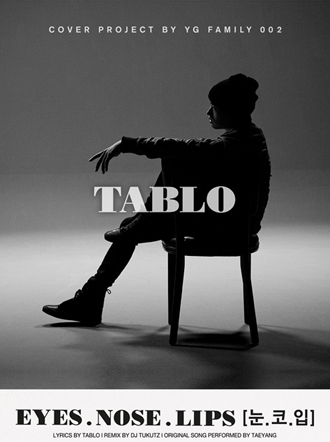 Yesterday afternoon, the agency posted a teaser image of Tablo, hinting that the MC will release a cover of the song.

The song was originally composed by YG’s producer Teddy, who also wrote Tae-yang’s 2008 single “Only Look at Me.”

Tablo’s version of “Eyes, Nose, Lips” will be remixed by DJ Tukutz of Epik High, and the rapper will put his own lyrics to some parts of the song. The song will be released 9 p.m. today.

Even after three weeks of its release, Tae-yang’s new studio album “Rise” continues to secure the No. 1 spot in major online music store.