Korea will fight to stay in Cup

Korea will fight to stay in Cup 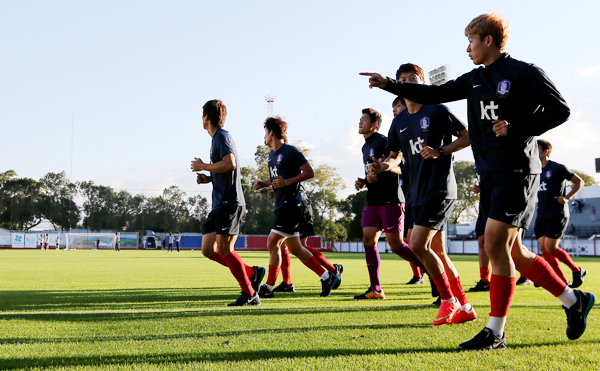 Korean national team players jog at the start of training at Foz do Iguacu, Brazil, on Tuesday to prepare for their last Group H match against Belgium. [NEWS1]

Hope for making the Round of 16 was high when Korea drew 1-1 against Russia last week. But the anticipation led nowhere after the Taegeuk Warriors were hunted down by the Algerian Desert Foxes on Monday, local time, with a terrible score of 4-2.

But no matter how disappointed fans already are, Korean Coach Hong Myung-bo wants to finish the event on a high, saying he will use every possible method to beat Group H leader Belgium, which is already in the final 16 after beating Russia 1-0.

Laughter from players and the coaches rung out around the camp at Foz do Iguacu after the Russia match, but the atmosphere has turned somber in the past three days. Players focused on recovering their stamina with the coaching staff and spoke little when confronted by reporters and fans.

“It has been a disappointment,” Coach Hong said. “But the event isn’t over yet even though we are in a very difficult position. We are trying to get rid of all those bad memories and move forward.”

There are many variables that could allow Korea to survive in the tournament, but to do so, they must beat Belgium by a big margin and pray for Russia to draw against Algeria, hopefully with a score of 0-0 or 1-1. Both matches start at 5 a.m. Friday, Korea time.

Korea’s best weapon is “Sonsation” Son Heung-min, the 21-year-old Bayer Leverkusen winger. In the nightmare match against Algeria, Son was one of the few attackers who did his job well, showing off his speed and skills and displaying the best fighting spirit on the team. He scored the team’s first goal in the 50th minute after eluding two Algerian defenders on the left edge of the goal area.

“I don’t want to regret anything when the World Cup is over,” Son said. “I promise that I will put my best effort on the field. I know the chance is very low for us in the second round, but the game isn’t over yet.”

Son looks ready to blast his firepower, but the question is whether Coach Hong is, too. He hasn’t said anything about his starting lineup for the Belgium match, but analysts predict that Hong might not make many adjustments, and striker Park Chu-young is at the center of the issue.

“It is obvious that Park has been the biggest disappointment on the roster,” said analyst Kim Ho, who coached Korea in the 1994 World Cup. “But it doesn’t mean that he will just take Park out of the starting lineup, because Hong still believes that Park is the type of striker who can match his football style, which emphasizes passing. That was why he only used the 196-centimeter [6-foot-6] Kim Shin-wook as a joker in the second half.” 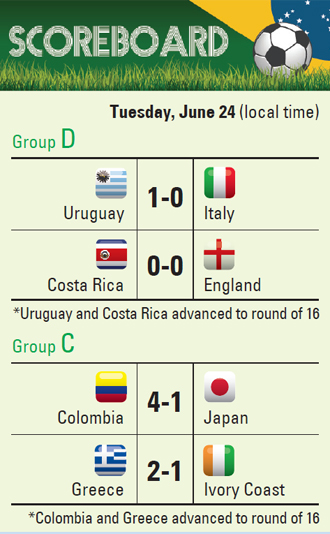 Hong is facing his toughest challenge of the event because the public will fiercely criticize him if he starts Park and the striker fails again. Fans will remember that Park failed to take a single shot on goal in the past two matches and that Kim became a major threat when the giant was placed on top of the offense line against Algeria.

The question is whether there is any chance of beating Belgium no matter who is on the field. Seol Ki-hyeon, an Incheon United forward who played in the 2002 Korea-Japan World Cup and played five seasons in Belgium from 2000 to 2004, is among the few optimistic people.

“Their football is similar to the Netherlands,” said Seol. “Since it only takes about an hour and a half to get from Brussels to Amsterdam, the two countries affect each other culturally and in football. When I played in Belgium, the country wasn’t that strong, but after they learned how to develop a farming system from Netherlands’ Ajax, they successfully fostered many young prospects.

“Their football ability as individuals is excellent,” he said. “But as a team, not so much. I think their coach, Marc Wilmots, hasn’t successfully developed the team to its best level when I watch them playing in this World Cup.”

“I remember the time I played against him in the Belgium league,” he said. “He is powerful and robust, but slow. Our speedy midfielders such as Son Heung-min and Lee Keun-ho need to find spaces behind him.”

Seol also recalled his memories of Vincent Kompany, the captain of Belgium who played with Seol in 2003-4 season for RSC Anderlecht.

“When I joined the club, he was with the youth team, but since one of our defenders got injured, he was called up to the adult team,” he said. “I thought he just joined the roster to fill up the vacancy, but he really played well in his first exhibition match and later became the team’s starting defender.”