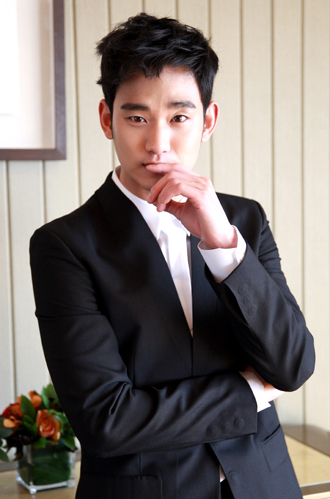 Kim Soo-hyun of the megahit drama series “My Love From the Star” announced that he has no plans to withdraw from endorsing a Chinese mineral water brand that sparked a huge political debate in Korea last week.

Kim’s fans at home were up in arms because the brand, Hongda Bingchuan, explicitly points out that its water originates from Mount Changbai, the Chinese name for Mount Baekdu. As the volcanic mountain straddles the border of North Korea and China, Pyongyang and Beijing decided to divide the mountain between them in 1962.

Many Korean fans feel that the conglomerate is trying to propagate that the mountain is solely owned by China by using Korea’s top celebrities to advertise its goods.

Last week, Kim’s agency Key East stated that they are sorry for not understanding the problem prior to Kim filming the commercial, adding that they tried to terminate the contract.

“We hope there won’t be any kind of misunderstanding because there is no political motif for the endorsement,” the agency said yesterday, hinting that the actor will continue to represent the brand.