Uruguay makes the cut but Suarez takes a bite

Uruguay makes the cut but Suarez takes a bite 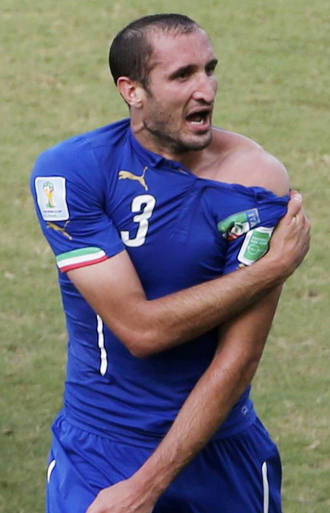 Uruguay forward Luis Suarez faces a lengthy ban after Italy defender Giorgio Chiellini accused him of biting during the South Americans’ 1-0 Group D victory on Tuesday, overshadowing a day of emotional extremes at the World Cup.

Tears of joy ran down the face of Colombia reserve keeper Faryd Mondragon when he became the oldest man to play at the finals at the age of 43, making a late appearance off the bench in a 4-1 win over Japan that secured Colombia the top spot in Group C.

There was anguish for the Ivory Coast and unbridled joy for Greece in the other Group C clash, after Giorgos Samaras converted a penalty in the dying seconds of injury time to snatch a 2-1 win and put the Africans in second place.

In the day’s other match, a goal-less draw with an experimental England side in Belo Horizonte was enough to secure Costa Rica first place in Group D and condemn the Europeans to their worst World Cup showing since 1958.

For all the footballing drama, it was Suarez’s off-the-ball antics against Italy that were the major talking point around the world.

Football’s world governing body FIFA said it was investigating the incident, which took the gloss off an otherwise glorious day for Uruguay after they edged 10-man Italy 1-0 in Natal to knock out the four-time former champion.

That decision by referee Marco Rodriguez swung the game in Uruguay’s favor, after Italy appeared to be heading for the draw they needed to reach the last 16.

With 10 minutes to go, Suarez clashed with Chiellini in Italy’s penalty area, and the Italians were still complaining that he had bitten the defender when Uruguay captain Diego Godin scored a fortuitous 81st-minute winner that flew in off his shoulder.

A furious Chiellini had pulled down his shirt to show a mark to the referee, and photographs from the game show what appeared to be bite marks on his shoulder.

“It was ridiculous not to send Suarez off,” he told Rai TV. “It is clear-cut and then there was the obvious dive afterwards, because he knew very well that he did something that he shouldn’t have done.”

The other big drama came in Fortaleza, where Ivory Coast was seconds away from making the knockout stage when Samaras was judged to have been tripped in the box by Giovanni Sio as the Greeks poured forward in search of a winner.

Samaras picked himself up after a debatable decision and kept his cool to stroke home the spot kick and make it 2-1, triggering wild celebrations during which the striker was buried under teammates who knew theirs was the narrowest of escapes.

“The end result is cruel, even if the Greeks deserved this victory,” said crestfallen Ivory Coast Coach Sabri Lamouchi.

“We could have had the match stopped one minute earlier. We saw that everything is in the details. It’s very tough, it’s very hard.”

The Greeks, who had failed to get past the group stage at their two previous appearances at the World Cup, will face Costa Rica in Recife on Sunday in the last 16.

Group D’s surprise package Costa Rica beat Uruguay and Italy before playing out a lackluster 0-0 draw with England to ensure a top spot.

England Manager Roy Hodgson made nine changes from a defeat by Uruguay that ruled out any chance of qualification, and despite the lack of goals, he praised the performance that capped a bitterly disappointing campaign.

Colombia, in the last 16 for the first time since 1990, thrashed Japan 4-1 to maintain their 100 percent record and set up a mouth-watering clash with Uruguay.

Off the pitch, there were royal Belgian blushes when footage appeared of Queen Mathilde congratulating Romelu Lukaku for scoring the winning goal in a 1-0 victory over Russia on Sunday, when the actual goalscorer was Divock Origi.