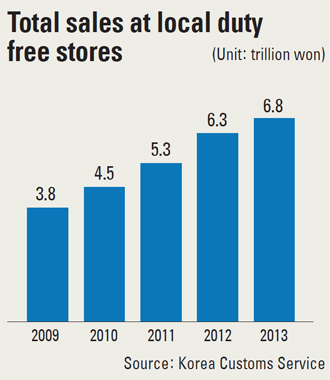 While the growing number of foreign tourists to Korea has led to an increase in sales at duty-free stores, competition is expected to get fierce among local retailers after Galleria Department Store joins the promising business tomorrow.

The retailer under Hanwha Galleria, an affiliate of Hanwha Group, said yesterday that it will open its first duty-free store on the third floor of Jeju International Airport. The opening comes more than four months after the retailer was selected to operate a duty-free store in the airport in February. Galleria said at the time that the 409-square-meter (489-square-yard) area at the airport was a perfect fit for the company as a newcomer to the duty-free industry.

“Operating duty-free stores is part of our efforts to diversify business for mid- and long-term growth,” an official from Galleria Department Store said yesterday.

Galleria Duty Free will compete with two other operators at the Jeju airport - Lotte and Shilla. Retailers have been aggressively expanding their duty-free businesses as demand grows. Korea Customs Service data showed that last year, total sales at duty-free stores in Korea reached 6.8 trillion won ($6.69 billion), up from 3.8 trillion won in 2009.

“Our target customers are Chinese and based on this target, we have mainly highlighted the brands preferred by them,” the official said.

Galleria Duty Free will sell items from 102 brands, including 24 domestic and imported cosmetics brands and 10 watch brands. The retailer noted that it will be the first Korean duty-free store operator to sell children’s items, mask packs and hair-care products.