The doctor the bureaucrats tried to stop

The doctor the bureaucrats tried to stop 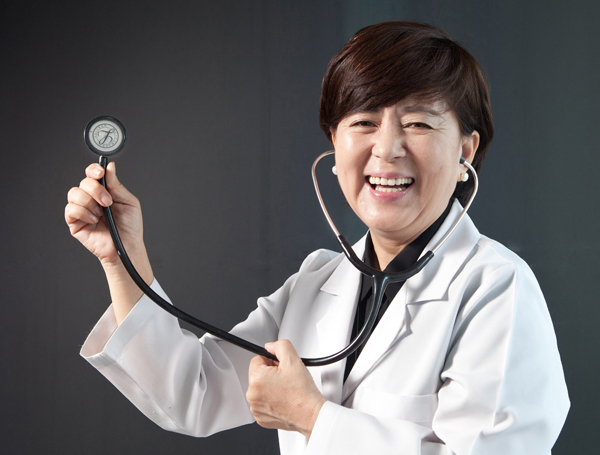 Kim Ji-eun, a defector who runs her own Jin Herb Clinic, is the only doctor who learned oriental medicine in both Koreas.Kim says unlike South Korean oriental medicine doctors, North Korean doctors use a stethoscope. By Park Sang-moon

'Although the number of North Korean defectors in the South surpassed 26,000 this year, most struggle to adjust and very few have made notable successes of themselves. There are so many media reports on their failures and problems that officials worry defectors will be stigmatized as incompetent parasites who can never succeed in their adopted country. The Korea JoongAng Daily is putting a spotlight on the “hidden defectors” who succeed in the capitalist South on their own through personal ambitions and efforts - without the need for government subsidies - to show the silver lining to defectors who are still lost in the dark cloud of adjustment.
Kim Ji-eun, a 47-year-old North Korean defector, survived the famines of the 1990s known as the Arduous March and an escape from her poverty-stricken homeland. She survived as an illegal immigrant in China and Beijing doing menial work.'

But one of the biggest hurdles Kim had to work through was the South Korean bureaucracy.

In North Korea, Kim had a bachelor’s degree from the seven-year Chongjin Medical University and had practiced oriental medicine as a doctor for nine years. When she defected to the South, she wanted to continue practicing medicine.

But to take the national medical exam, Kim was required to prove her medical degree, which she couldn’t do. The Ministry of Health and Welfare refused to allow her to take the exam unless she came up with the proper documents - and even suggested she return to the North to get them.

Kim is now practicing medicine in Bucheon, Gyeonggi, and thanks to her personal history, future doctors who defect to the South will have an easier time getting permission to practice.

“I told them, ‘This is not merely a matter of my own career,’” Kim recalls of her fight with authorities.

“I said, ‘If the two Koreas are reunited someday, there will be hundreds of North Koreans in exactly my situation. The law needed to be changed to help them settle down in South Korea.’”

In fact, Kim never dreamed of defecting to the South, but after the famine of the 1990s, she realized she had to leave her homeland.

“Although I was a doctor, I didn’t get any special treatment during the famine,” she says. “There were times when I didn’t have anything to eat for eight consecutive days.”

She left the North in 1999. But as an illegal immigrant in China who couldn’t speak Chinese, there were only a few ways for her to survive. Her first destination was a small farming village in Helong City, the border region where many ethnic Koreans live. She made a living taking care of old people.

Then she moved to Beijing, where she believed she would be safer from any crackdown on North Korean defectors by Chinese police. Without relatives or friends, she bounced from job to job working as a maid or an hourly worker at guesthouses run by ethnic Koreans.

“I was so shocked by the development in China,” she says. “Our dear leader, Kim Il Sung, always said he would make an ideal Communist country where people could eat meat soup with rice.

“But in China, I found even the dogs ate the kind of meat soup I couldn’t afford in my hometown.”

China was where Kim intended to stay.

“Although I was determined to never return to my country, I did not wish to go to South Korea,” she says. “North Korea brainwashed us that the South was a terrible country to live in.”

One day, however, Kim saw a notice from a South Korean professor seeking a Korean-speaking housemaid. Describing herself as an ethnic Korean-Chinese, she got the job, which became a turning point in her life.

“We were really good friends,” she says. “The female professor, who is now teaching Chinese at a top university in South Korea, respected me as an equal human being. Her kindness changed my previous prejudice about South Koreans and their society.

“One day, she told me that she had to return to South Korea and proposed I come with her to work in South Korea,” Kim says. “So I had to tell her the truth - I was a defector from North Korea. I couldn’t come with her.”

“Before I departed, I read many South Korean books, magazines and newspapers,” she says. “The South Korean society depicted by the books was indeed, a magical place - I felt once I got there, I could obtain anything I wanted.

“But when I arrived, the reality was very different from the books,” she says. “South Korean society was suffocating. I felt everyone was struggling in a kind of net, desperate to escape it.”

Kim says one of the most difficult things to adjust to was the “empty words” of South Koreans.

“People always promise we’ll have lunch some time in the future, but they never actually follow through,” she says. “It took a quite a lot of time for me to realize those words were all just expressions of rejection.”

It didn’t help that Kim got trapped in one of the direct-sales marketing companies famous for exploiting their workers. They operate as part-self-help cult, part-pyramid scheme company.

“At the Hanawon resettlement center, defectors are warned not be fooled by those pyramid scheme businesses,” she says. “But despite the training, I was attracted to them because they never called themselves ‘pyramid schemes,’ of course. They say they are ‘networking’ companies. That English word sounded really fascinating to me.”

It was an expensive fascination.

“I only realized the truth after I lost a lot of money,” she says. “I learned I should not expect to be lucky, but would have to work diligently to survive.”

Kim finally decided to get licensed as a doctor in South Korea. At first, the bureaucracy went overboard to help, and the Education Ministry issued a certificate in the name of the minister recognizing her bachelor’s degree from Chongjin Medical University.

But to apply for the national exam to become a doctor, she needed approval from the Health Ministry.

“A Health Ministry official demanded I go back to North Korea and collect some documents to prove my degree, such as a graduation certificate,” she recalls. “I was so furious. I told the official, ‘If you really want me to go back to North Korea, make sure it would not be a violation of the National Security Law. Can I visit North Korea as a South Korean citizen?”

If the bureaucrats were the bane of Kim’s existence, the politicians rode to her rescue. With the help of Representative Kim Hyun-mee of the New Politics Alliance for Democracy, Kim attended a hearing at the National Assembly to discuss her plight.

“I told the assemblymen that I studied medicine for seven years and worked as a doctor in North Korea for nine years,” she says. “I said I was willing to attend medical school all over again if I had to. I also told them I could create a new kind of oriental medicine studies combining the practices of North and South Korea.”

Her speech at the hearing was reported in the media.

“A lot of universities volunteered to accept me as their student,” Kim says.

She entered Semyung University’s College of Oriental Medicine. She was in her late 30s, while the other students were in their mid-20s.

“I studied all the difficult English terms with the help of my fellow South Korean students,” she says. “I paid the full tuition of that expensive college without a scholarship, working as a lecturer at broadcasting stations and government organizations, and spending only about 20,000 won per month.

“The four years of study were never useless,” she says. “I am the only doctor in South Korea who learned oriental medicine in both Koreas and that actually works to build up my reputation as a doctor.”

But future doctor defectors will not have to go to medical school all over again. Three years after she testified at the National Assembly, South Korean lawmakers passed a bill allowing any North Korean defector who can prove his or her career as an oriental medicine doctor to take the national test to become a doctor in South Korea.

“Although I did not benefit from the law,” Kim says, “the defectors who will come later will.”

Kim runs her own hospital in Bucheon, Gyeonggi, called the Jin Herb Clinic.