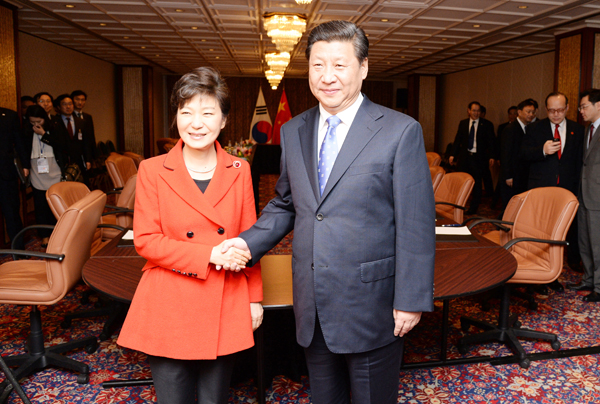 President Park Geun-hye met with Chinese President Xi Jinping on the sidelines of the Nuclear Summit in The Hague in March. [Joint Press Corps]

Chinese President Xi Jinping’s new security plan for Asia is amazing. At the Conference on Interaction and Confidence-Building Measures in Asia (CICA) in Shanghai in May, Xi gave a keynote speech that effectively declared China’s initiative in the new order. He advocated a need to create a security council of Asia, by Asia and for Asia. He was very straightforward in his vision:

?The interests and security of Asian countries are closely intertwined, and they will swim or sink together and increasingly become a community of common destiny.

It is the first group security plan since the founding of modern China. It is compared to the Organization for Security and Co-operation in Europe (OSCE). The common destiny of Asia does not conform to China’s non-alliance foreign policy. It is actually more similar to NATO’s core ideas than the loose boundary of OSCE. Article 5 of the North Atlantic Treaty states, “The Parties agree that an armed attack against one or more of them in Europe or North American shall be considered an attack against them all.” NATO is essentially “one for all, all for one.” Xi’s speech contained two more interesting concepts:

? To beef up a military alliance targeted with a third party is not conducive to regional security.

? For most Asian countries, development is the greatest security and the master key to the issue of regional security.

Xi articulated China’s negative perception of an order led by America and its allies. He advocates a mutual existence and prosperity of Asia glued together by development. Xi said a clever man changes according to the time and proposed to build CICA as a new framework of security cooperation. Twenty-six countries, including Korea, are members of CICA, and the United States and Japan are observers.

Xi’s new security plan is a check on America’s pivot to Asia. China has changed drastically. Deng Xiaoping’s defensive diplomacy has ended. China is no longer willing to accommodate the old order and now wants to create a new order. It is reminiscent of the Qin Dynasty’s alliance tactic to unify China in the Warring States period. In order to conquer the other six warring states, Qin built separate partnerships with six countries. Using a similar strategy, China is trying to build an axis to counter the security cooperation among the United States, Japan and Southeast Asian countries, which would grow tighter with Japan’s right to collective self-defense. A clash of civilizations could happen between the United States and China. The United States has a strong tendency toward exceptionalism, a belief that America has a special calling to promote liberty and human rights. When President Obama addressed West Point graduates on May 28, he said that supporting democracy and human rights around the globe is a matter of national security. America’s idea has nothing in common with Xi’s concept of looking at development as a premise for security. After all, China is also an exceptional country built on Sino-centrism from ancient times.

Xi’s plan forewarns of an impact across Asia. The core of America’s pivot to Asia policy is to reinforce partnerships with its allies. Rivalry between the United States and China seems inevitable. China could pressure America’s allies with policy initiatives. China’s economic influence is unmatched in Asia. Korea is at the center of the structural confrontation between the United States and China. America is an ally, and China is a partner for strategic cooperation. Therefore, joining the Thaad system, which US Forces Korea is reviewing, or the Asian Infrastructure Investment Bank initiated by China would have serious ramifications.

We need to have set principles for alliances and partnership diplomacy. The Korea-U.S. alliance is the cornerstone of our security. We cannot imagine defense without America’s security pledge and nuclear umbrella. The dividend of peace that the alliance has brought us can be the seed money for prosperity. It is just not visible. The Korea-U.S. partnership is a window of opportunity. Capital, commodities and people are circulating dynamically. There is great room for improved relations. The two relationships are different, but both are valuable. If we get them confused, Korea could become a lost child in the international community. When interests between the United States and China collide, we have to explain the situation and persuade. If we have the greater framework, we can reach a compromise. That’s what diplomacy does.

We must not think the rivalry between the United States and China demands that we choose a side.

The U.S.-China relationship is different from the zero-sum game of the Cold War confrontation between the United States and the Soviet Union. The dichotomy would only trap Korea. The rivalry of the two powers is a challenge, but Korea’s diplomatic space depends on how we respond.