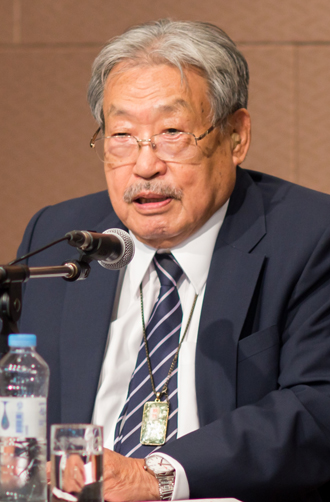 As Choi Seo-myeon sees it, the current political situation in Japan is similar to that in Germany in the lead-up to World War II.

In a special lecture on June 18 at Yonsei University, the 88-year-old head of the International Korea Research Institute even stated that Japanese Prime Minister Shinzo Abe “makes me recall [Adolf] Hitler.”

“After a defeat in World War I, Germany analyzed the reasons for that loss and then produced tanks, aircraft and automobiles to develop their industrial sector,” the academic said in his address on the “Truth and Lies of Japan Today,” which was attended by scholars, public officials, businessmen and students.

World War II “was the result of Germany becoming powerful and deciding it wanted treatment befitting Germany,” he said.

In reference to the Abe administration’s aims to bolster its military and deny its wartime aggressions, Choi added: “Japan is now returning to the state it was in right before it instigated the Pacific War.”

During his lecture, he mentioned some 30 books currently being sold in bookstores in Tokyo that contain nationalist slants, including one that purports that Korea’s early 20th-century independence fighter Ahn Jung-geun “is a terrorist.”

“If you go to bookstores in Japan, there are 10 times as many such books on display. And because there are so many errors, the real right-wingers in Japan must be embarrassed,” he said.

“The era where you shoot a canon and [forcibly] seal diplomatic relations is over.”

Choi moved to Japan in 1957 and studied relations between Korea and Japan there for more than 30 years, backing his careful research with evidence-gathering.

During the course of his work, he also discovered important documents, including Ahn’s autobiography and trial records and official Japanese documents that prohibited fishing in the waters around the Dokdo islets.

The islets are effectively controlled by Seoul, though Japan claims they are part of its territory and refers to them as Takeshima.

His last wish, he added, was for Ahn’s remains to be excavated in China and repatriated to Korea.

Ahn was hanged by Japanese officials on March 26, 1910, at the age of 30, and the location of his remains are a mystery. In his will, the Korean independence fighter wrote that he wanted his body to be returned to his homeland after Korea achieved independence from Japan.

Choi admitted that his bedroom in his residence in Jongno District, central Seoul, is filled with publications about the man who is remembered as one of Korea’s greatest heroes.

But, the scholar continued, “I hope my research will not be used for Korea, China and Japan to try to dominate one another. [I hope instead that the] past will be seen as a lesson so that we can build a progressive relationship together.”