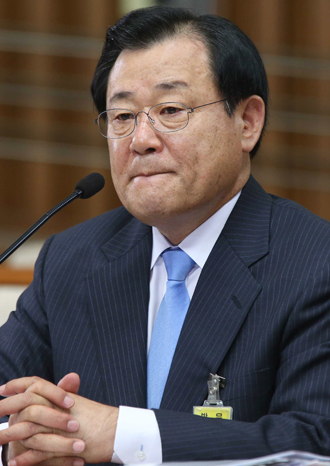 Lee Byung-ki, the NIS chief nominee, at his confirmation hearing in the National Assembly yesterday. By Oh Jong-taek

Lee Byung-ki, the nominee for director of the National Intelligence Service (NIS), apologized yesterday in front of lawmakers at his confirmation hearing for delivering slush funds for the Grand National Party, the predecessor to the ruling Saenuri Party, during the 2002 presidential election campaign.

At the time, Lee was working as a special envoy to Lee Hoi-chang, the presidential candidate for the GNP. He was sentenced to pay a fine of 10 million won ($9,900) for violating the Political Funds Act after passing on 500 million won to a public affairs envoy for Rhee In-je, who was then the vice chief of a third-tier political party.

The money was reportedly exchanged to persuade Rhee, an influential figure, to wage a campaign that would be favorable for Lee Hoi-chang. Rhee was fresh out of the ruling Millennium Democratic Party at the time.

However, Lee contended that he was simply delivering the money the party gave him, denying allegations that he was deliberately trying to “bribe” Rhee, who is now a Saenuri lawmaker.

Lee was tapped on June 10 to replace former NIS chief Nam Jae-joon. Should he pass the hearing, he is set to become the first intelligence director with a diplomatic background in 30 years since Lho Shin-yong, who headed Korea’s top spy agency between 1982 and 1985.

Nam stepped down on May 21 to take responsibility for major scandals that have undermined the spy agency’s reputation. The NIS is in the midst of its worst crisis following its involvement in a smear campaign against Moon Jae-in, the opposition’s presidential candidate in the 2012 election.

It came under fire again earlier this year after the prosecution revealed that its agents had intentionally doctored evidence in an appeals case against a Korean-Chinese man suspected of spying for Pyongyang.

“I intend to erase the words ‘political interference’ out of my head,” Lee said at the hearing, “should I take the helm.”

After serving as presidential protocol secretary in the Roh Tae-woo administration in the early 1990s, he worked at the Agency for National Security Planning, the predecessor of the NIS, between 1996 and 1998 under the Kim Young-sam administration, and tentatively finished his career as a government official.

Until being picked as the ambassador to Japan early last year, he was actively consulted by Park Geun-hye when she was a GNP lawmaker and eventually emerged as her top aide.

The hearing was forced to adjourn for nearly 40 minutes in the morning after an NIS employee entered the room at the National Assembly without permission and started tape-recording the proceedings.

“How can an NIS official monitor lawmakers at will at the confirmation hearing?” said Park Young-sun, the floor leader of the New Politics Alliance for Democracy. “This is a serious matter that shouldn’t happen.”

The NIS worker reportedly wore a temporary press pass badge. Lawmakers in attendance later learned that the pass was issued by the National Assembly. It is a long-held practice to issue NIS officials press passes to be admitted to the Assembly building.

The hearing was later resumed.