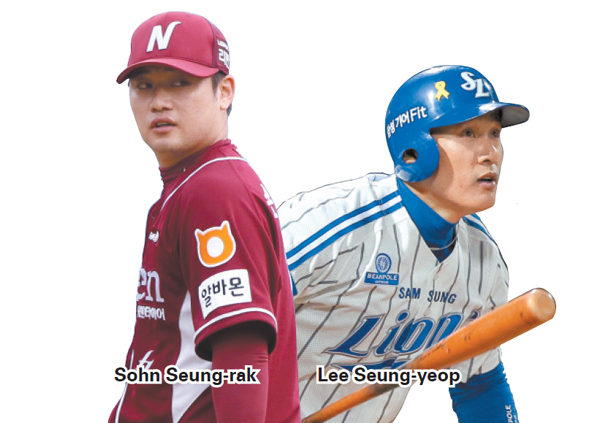 The defending champions Samsung Lions look stronger than ever despite losing several key players in the offseason, and the NC Dinos have grown into a frightening T-Rex in the jungle of the KBO with stable pitching and rising stars such as Na Sung-bum.

The season is about two weeks from the halfway point and Pickoffs looked into each club’s journey in a two-part series. All records and statistics used are as of Monday.

The scariest thing about the defending champions is that they don’t have any defects. Before the season began, their biggest worries were the closer and leadoff positions after their closer Oh Seung-hwan left for Japan and leadoff outfielder Bae Yeong-seob went to finish his two-year mandatory military service. Questions were raised over veteran slugger Lee Seung-yeop, who needs to support the middle of the Lions’ lineup - consisting of Choi Hyung-woo, Park Suk-min and Chae Tae-in - after he had a disappointing 2013 season with a .253 batting average and 13 home runs. But those worries are gone from the clubhouse after the closer role was filled by Lim Chang-yong, who returned from Major League Baseball, and Dominican Republic import Yamaico Navarro became one of the best leadoffs in the league with a .325 BA with 18 home runs and a .429 on-base percentage (OBP). At 38 years old, Lee looks like he has turned the clock back to the early 2000s, hitting a .303 BA with 19 homers and 58 RBIs. The Lions are the most balanced team in the league with a .296 BA - .001 behind the league-leading Nexen Heroes - and a 4.23 team ERA, which is the second best in the league. They are leading second-place Heroes by five games, and it looks like they will win the pennant race for four years in a row.

The league’s most intimidating batting lineup has been the Heroes’ key to success this season. Their lineup, reminiscent of the Bronx Bombers, starts off with the league’s home run leader Park Byung-ho (.297 BA/29 HRs/59 RBIs) and Kang Jung-ho (.336 BA/24 HRs/66 RBIs). Their .297 team BA is the best in the league and their 108 home runs put them 17 ahead of second-ranked Lions and 63 ahead of bottom-of-the-league Hanwha Eagles. Their biggest problem is pitching. The Heroes’ 5.76 ERA is sixth in the league and they have allowed a total of 463 runs while scoring 466.

Their closer Sohn Seung-rak, who had the most saves last season (46 saves/2.30 ERA), is struggling (21 saves/4.83 ERA). But Sohn showed some positive signs on Saturday against the Kia Tigers in his first appearance since he returned to the KBO after spending 10 days in the Futures’ League. His fastball was back on track, reaching speeds of up to 147 kilometers per hour (91 miles per hour) and his sliders broke sharp.

But the Heroes still need to improve their overall pitching. If right-handed starter Henry Sosa (3-2/7.61 ERA), who replaced Brandon Knight earlier in the season, continues his roller-coaster performance, the Heroes need to consider replacing him before the All-Star break. In the postseason, the Heroes will find it impossible to win the championship without stable pitching.

The Dinos are the only team in the KBO that is allowed to have three foreign pitchers, a benefit given to the club by the KBO because it’s only in its second season. And they are definitely enjoying the advantage. Their 4.03 team ERA is the best in the league and their starting rotation - consisting of Eric Hacker (8-2/3.79 ERA), Charlie Shirek (6-5/2.92) and Lee Jae-hak (8-4/3.48 ERA) - is one of the best in the league. However, their third foreign starter, Thad Weber (6-4/4.88), needs to improve. Veteran outfielder Lee Jong-wook who has bat at the leadoff spot during this season and at second, fifth and sixth (.281 BA/73 hits) has brought hits and speed and also stabilized the right-field defense. Shortstop Son Si-heon (.295 BA/31 RBIs) has improved the bottom of the team’s batting lineup and its center-line defense.

The Dinos were one of the worst teams in defense last season. In hitting, U.S. import Eric Thames (.323 BA/20 HRs/65 RBIs) and Na Sung-bum (.348 BA/18 HRs/63 RBIs) are dominating the league, and their closer Kim Jin-sung (13 saves/3.42 ERA) is performing better than expected. But the young team makes many mistakes in defense in critical situations, which will be a serious problem in the Fall Classic.

The best weapon for the Busan-based club is Manager Kim Si-jin, who has led the team since November 2012. The Giants spent 7.5 billion won ($6.98 million) for a four-year deal with their franchise star Kang Min-ho, which was the biggest KBO contract ever, and added free-agent slugger Choi Jun-suk and Venezuelan Luis Jimenez.

Jimenez has shown his abilities with a .343 BA and 14 HRs, but he needs to stay healthy, after already missing 14 games. Choi (.288 BA/14 HRs) has had difficulty finding his place, which has been a headache for Manager Kim, who is also trying to figure out how to best utilize Choi and the Venezuelan together, who are competing for the DH spot. Surprisingly, Kim sent the league’s best defensive first baseman Park to left field then put Jimenez at first while Choi took the DH role and it’s been working well.

The team’s .293 BA is fifth in the league, only .004 behind the Heroes. Manager Kim really wants to see his right-handed starter Song Seung-joon (4-8/5.76 ERA) back in shape and his new closer Kim Seung-hoe (12 saves/3.21 ERA) continuing to perform as he has been recently.