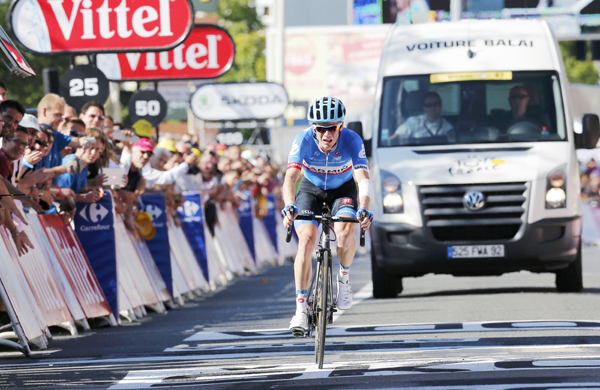 Garmin-Sharp team rider Andrew Talansky of the United States crosses the finish line of the 187.5-kilometer (116-mile) 11th stage of the Tour de France between Besancon and Oyonnax on Wednesday. [REUTERS/NEWS1]

After a long talk with Garmin-Sharp’s sports director, Robbie Hunter, Andrew Talansky remounted his bike, his face a clear mask of pain.

The American rider, suffering from lower-back pain after two crashes earlier in the Tour de France, had stopped about 100 kilometers (62 miles) into the 11th stage to sit on a crash barrier by the side of a sun-drenched road.

Race organizers announced that Garmin-Sharp had abandoned the Tour, but Talansky was back on his bike, accompanied only by his pain.

Ironically, his team set a hard pace in front of the bunch, possibly to prepare a stage win for their Dutch rider, Tom-Jelte Slagter, making it harder for Talansky to finish inside the time cut.

He crossed the line 32:08 minutes behind stage winner Tony Gallopin of France.

“He had a very tough day. We had hoped he could have a better day. It’s typical of cyclists and especially of Andrew,” said Charles Wegelius, the team’s other sports director.

“It came from these two crashes in two days. He needed some reassurance from Robbie about the situation he was in,” Wegelius added.

On Monday, Spain’s Alberto Contador also showed that riders are tough guys, riding 15 kilometers - almost 10 of them uphill - with a shinbone fracture before pulling out of the race.

Talansky was his team’s leader after having won the Criterium du Dauphine, the warm-up race for the Tour, beating Contador and defending champion Chris Froome.

Shaking and crying as he reached his team bus, Talansky said: “My back is hurting, but I wanted to finish for my teammates.

“I continued for my team, for my mates. They trusted me for that Tour, I could not stop after all they had done for me.”

The Tour being merciless, Talansky was fined 50 Swiss francs ($55.64) for taking shelter behind the team car as he was looking to make it back into the peloton.

After a solid start to the Tour, Talansky had initially crashed at the end of the seventh stage and fell off his bike again last Sunday in the first stage in the Vosges massif.