A prime example of Goryeo celadon

A prime example of Goryeo celadon 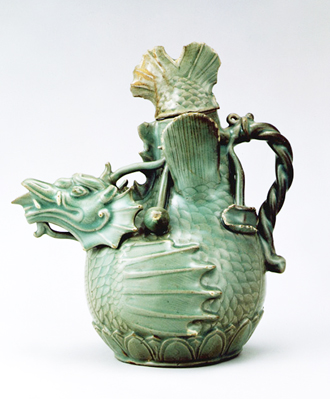 The piece is shaped to form an imaginary creature with a dragon’s head and a fish’s body, which is symbolic of the prevention of fire, and which is often employed as an architectural decoration. It has a spout molded like a dragon’s head, and white paint is applied to the edge of its wings and teeth.

The engravings of the dragon’s wings and body are incised in delicate lines.

Scale-like etchings cover the vessel’s fish-shaped body, and large wings are formed on each side.

The handle, which is in the shape of twisted lotus stalks, is fitted neatly on the upper part of the vessel, while its lid resembles the fin of a fish.

On the whole, the celadon piece projects an extraordinary but fully designed image of an imaginary animal.

The color, a greenish blue with a deep tone, and the delicate incisions, reveal the refined skill of Goryeo potters. The piece is a distinctive example of celadon because of its shape.

The item is 24.4 centimeters (9.6 inches) in height, while the diameter of its base measures 10.3 centimeters.


Name: Celadon Ewer in the Shape of a Dragonfish