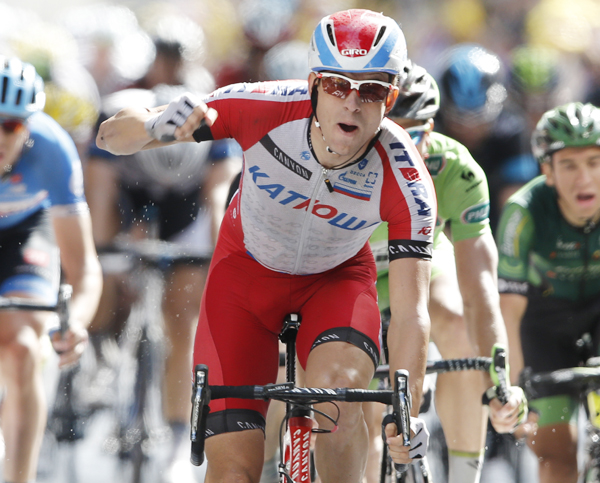 Almost at the line, Jack Bauer and Martin Elmiger were exhausted but could see it coming - their first Tour de France stage victory. Those last 50 meters (164 feet), however, got in the way.

A group of sprinters leading the pack came speeding like a runaway train and plowed past the huffing breakaway duo in the final milliseconds. Stage 15 belonged to Norwegian speedster Alexander Kristoff, his second stage victory in this Tour.

The 138-mile stage went smoothly for overall leader Vincenzo Nibali of Italy. He made sure his main rivals couldn’t claw back any time, and he kept his yellow jersey by finishing in the trailing pack.

After two days in the Alps, Sunday’s stage offered some relief over a flat course from Tallard toward Nimes, known for its Roman arena and bullfighting. Monday is a second rest day.

This ride showed yet again how mighty efforts so often go unrewarded on the tour.

Bauer is a New Zealander who had a better shot of holding off the sprinters than Swiss champion Elmiger. Bauer dropped his bike after the finish line, sat on the ground and cupped his face in his hands, crying. They had led nearly from the starter’s gun.

“It’s a fantasy for any cyclist to win a stage at the Tour and especially for a Kiwi cyclist; not many of us turn professional and not many of us get a chance to start the Tour de France,’’ Bauer said. The 29-year-old rider came to the Tour to help Garmin-Sharp leader Andrew Talansky, who dropped out before Stage 12 because of injuries from an earlier crash.

The pack perfectly timed its move on the breakaway duo and proved too strong. Bauer was pedaling with his last remaining strength; when he looked back a last time they were already zooming by. He finished in 10th place, with Elmiger 16th.

“I really gave it absolutely everything, and as you can see from my meltdown at the finish I was pretty disappointed to come away empty-handed,’’ Bauer added, noting he’s usually a support rider. “I thought I had it, but then I realized in the last 50 meters that I had nothing.’’

The Swiss rider with IAM Cycling took it more in stride. This, after all, wasn’t the first breakaway to fail in this Tour. “I am not disappointed because I actually did not have the best legs today,’’ Elmiger said. “Being caught by the pack is not so bad when you are convinced you have given everything. As I have already said three times this Tour after breaks have failed, one of these days the wheels will turn in my favor.’’

“It was a little bit late for comfort. It was very close,’’ he said. “I thought I would be second. We turned on the gas.

“Of course, that’s a pity for them, but I don’t feel sorry for them,’’ he said. “Normally, the break should never have had a chance, but they did. They were really strong guys. That must have been really hard.’’

With about 12 miles left, rain briefly doused the riders, though skies brightened by the end. A series of roundabouts and leg fatigue among the sprinters after the Alpine stages gave an advantage to the breakaway pair until the final seconds.

Nibali kept his main rivals for the Tour title at bay. He leads Spain’s Alejandro Valverde by 4:37 while Romain Bardet of France is third, 4:50 behind. Some of Nibali’s closest rivals have already said the race is now for second place.