Park, Ryu take out U.S. to go through to finals

Park, Ryu take out U.S. to go through to finals 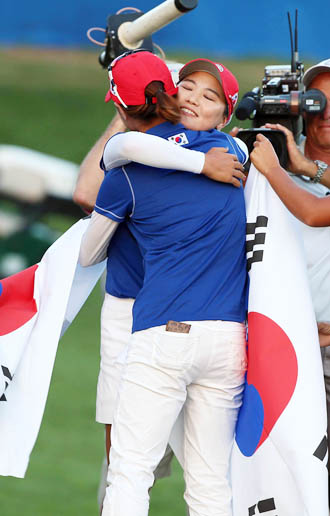 Ryu So-yeon, right, and Choi Na-yeon celebrate after finishing Round 3 of the International Crown in Baltimore, Maryland, on Saturday. [NEWSIS]

Park In-bee and Ryu So-yeon both birdied the first playoff hole Saturday as South Korea eliminated the top-seeded United States and earned a wild-card berth in the final round of the International Crown.

The Koreans will join Spain, Thailand, Japan and Sweden on Sunday in a duel for title.

After the American team of Cristie Kerr and Lexi Thompson beat Thai sisters Ariya and Moriya Jutanugarn 3 and 2, Thailand’s Pornanong Phatlum and Onnarin Sattayabanphot edged the team of Paula Creamer and Stacy Lewis 1-up to leave the United States in third place in Pool A.

South Korea, the third-place finisher in Pool B, called upon Park and Ryu to face Kerr and Thompson in a wild-card playoff on the par-5 16th hole.

Thompson’s second shot hit the fringe of the green, sat for an instant and then rolled back down a hill. She attempted an uphill putt, which barely made it to the top of the hill.

Thompson subsequently missed her 10-foot putt, and the other three players made birdies. According to the unique wild-card format, that eliminated the United States.

Spain won Pool A with seven points, earning the tiebreaker over Thailand, which also had seven points. The United States had six points and Taiwan finished with four.

Japan split with Korea on Saturday to emerge atop Pool B with eight points, and Sweden swept Australia to finish with seven points. South Korea had six points and the Aussies had three.

Points accumulated over the first three days carry over to Sunday’s final round, when each country plays one singles match against every other country. The team with the most points wins the inaugural International Crown.

Spain eliminated Taiwan with a pair of contrasting victories. Carlota Ciganda sank a 5-foot birdie putt on No. 13 to seal a 6-and-5 win with teammate Azahara Munoz. The duo beat Yani Tseng and Phoebe Yao, who lost five of the first six holes and could not recover.

In the other match, Spain’s Belen Mozo and Beatriz Recari lost the first two holes and were 2 down after 11 holes before rallying for a 1-up win over Candie Kung and Teresa Lu.

It was a feel-good afternoon for the Spaniards, who lost twice Friday to the U.S. team.

“We learned from it,” Munoz said. “We talked about it this morning and we said that from the beginning, no matter what, we’re going to keep our heads up and just give it our best.”

Taiwan lost its final four matches after opening the tournament with a sweep of the Americans.

The Japanese team of Ai Miyazato and Sakura Yokomine beat Choi Na-yeon 3 and 2, and Park and Ryu bested Mamiko Higa and Mika Miyazato 4 and 3.

Yokomine made two eagles on the back nine to give Japan the win.

Parmlid, who is pregnant, came out of retirement to play in this event.

“Last year, I was one spot out of the Solheim Cup and I always wanted to play these team events,’’ she said. “Then they came up with this tournament, and I was one spot in.’’

Australia won only one match over three days, the fewest of any country.