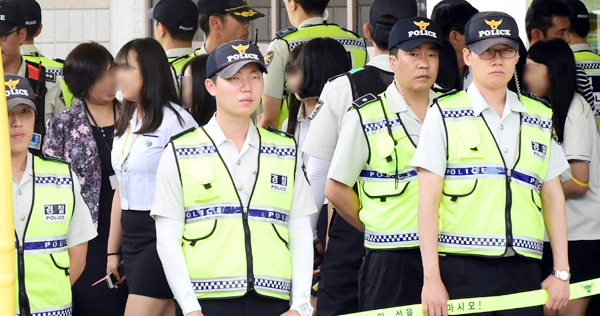 Students from Danwon High School who survived the Sewol tragedy in April return home after attending a hearing as witnesses at Suwon District Court’s Ansan branch in Gyeonggi. [NEWSIS]

Judges in the murder trial of the Sewol ferry’s captain and its 14 crew members heard testimony yesterday from survivors about the ship’s final hours.

Most of the 300-plus casualties on the Sewol were 11th-grade students from Danwon High School on a field trip to Jeju Island.

“At around 8 a.m. on the day of the accident, I was sleeping in my cabin after having breakfast at the cafeteria on the third floor,” the witness said. “Suddenly the ship tilted and bags and cosmetics in a cabinet poured out, and my friends were sliding toward a window on the left side.”

The witness was in cabin SP1 on the fourth deck on the port side at the rear of the ship.

“We could see containers fallen from the ship floating on the sea,” she added. “From the beginning, I thought we could sink given the condition of the ferry, so we wore life jackets.”

She said the crew announced through loudspeakers that passengers should put on life jackets and stay inside the cabin long after the ferry started to list.

“The announcement came when we were running about in confusion, so we followed the instructions and waited inside the cabin because we thought the captain or crew members knew best.”

But she said no one tried to guide them from the ship, including crew members and also Coast Guard officers who arrived at the scene later.

“When water began to surge inside the cabin, we were terrified and ducked inside a cabinet,” she said.

As water filled up the cabin, the cabinet was overturned and the 17-year-old student and one of her friends were trapped in it. By that time, the ferry was listing almost 90 degrees so the cabin door was above her head.

“A friend and I could breathe because an air pocket was formed inside the cabinet and we waited for rescue,” she said. “Later, the cabinet split apart and we floated to the surface. Other friends in the ferry rescued us.”

When she came out of the cabin, she and her friends headed to the exit near the stern on the fourth floor.

“I remember a class of students [numbering about more than 30] came out of their cabins and gathered in the corridor,” the witness said. “We didn’t rush out but came out one by one because we were relieved to see the Coast Guard vessels outside.

“But a huge wave hit the exit right after I came out, flushing more than 10 remaining students back into the corridor, and they could not make it out again.”

She said, “When we were coming out of the corridor, we said that we could reach the Coast Guard if we stretched out our arms at the exit. But we also wondered why the officers weren’t coming in to rescue us.”

When asked whether the judiciary should render strict punitive actions, the six survivors who attended the examination unanimously said “yes.”

A witness said, “We made it on our own, and more of us could have been saved with adults’ help.”

Seventeen more student survivors are slated to testify today in another hearing.