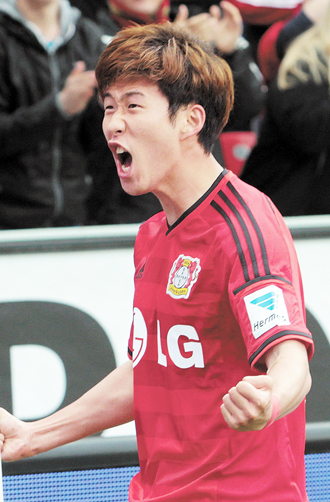 As the September 2014 Incheon Asian Games approach, the biggest concern for most athletes is whether they will be chosen to represent their country in the continent’s biggest sporting event.

For Korean men, a gold medal would mean more than glory: an exemption from the mandatory two years of military service that would allow them to continue their careers uninterrupted.

At about noon yesterday, Son Heung-min of Bayer Leverkusen arrived at Incheon International Airport with his teammates for a preseason friendly match against FC Seoul at 7 p.m. tonight at World Cup Stadium.

Son is one of the most popular football players in the country, but another reason football insiders are watching is because the club is expected to meet with national football team coach Lee Gwang-jong about allowing the 21-year-old midfielder to play in the Asian Games that occur at the beginning of the season in Germany.

“As an athlete, I always want to play for my country in an international competition,” Son said at a stadium press conference. “I expect to play in the Asian Games and want to win a gold medal, but as the team hasn’t decided its final roster for the event, I think I’m not able to discuss any details. Since I’m here now for the friendly match, I will just try to win the game.”

The Asian Games is not one of the competitions recognized by FIFA regulations, which stipulate that teams should send their players only to the World Cup, events such as the Asian Cup organized by the Asian Football Confederation, and A-matches approved by FIFA.

The Bundesliga kicks off its season on Aug. 24 and the first match for Korea in the Asian Games is Sept. 14. Lee is expected to decide on his 20-man final roster by Aug. 15. 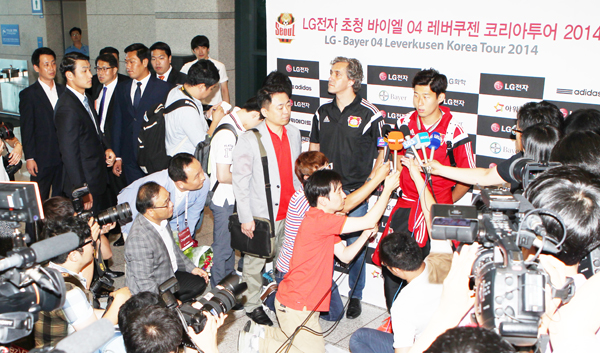 Under the circumstances, Bayer Leverkusen holds the key not only to whether Son can play in the Asian Games, but a possible military exemption if Korea wins the gold medal.

Having Son, who scored more than 10 goals in each of last two seasons in the Bundesliga, would be a huge boon to the national team, which has not won gold at the Asian Games since 1986, when they were held in Seoul.

Only players under 23 are allowed to play in the Asian Games, but the wild cards allow each nation to pick three players over the age limit.

Sources said Lee will try to meet with Bayer Leverkusen officials during their stay in Seoul and plan to huddle with Son’s father, Son Woong-jung, who can directly communicate with Leverkusen about why allowing his son to play in Incheon could pay big dividends down the road.

“You never know the future,” said football analyst Park Mun-sung. “Son is a popular and young athlete, and many teams are willing to pay more than 10 million British pounds ($16.9 million) to acquire him, but since he still has to go to the military, the price tag on the midfielder would fall in the coming years. Those clubs with Korean players should understand that the Asian Games is probably the national team’s easiest route to a gold medal.”

If history is any indication, however, it won’t be easy to persuade Leverkusen.

Before the 2011 FIFA U-20 World Cup in Colombia, Lee asked Hamburg SV to allow Son to compete, but the team refused. Hamburg at the time said it needed Son for its tough league schedule.

Son would miss at least four league matches if he plays in the Incheon Asian Games.

Unlike Son, defender Kim Jin-soo, who joined TSG 1899 Hoffenheim in the offseason, joining the Asian Games squad would not be a problem as his contract guarantees he can play in the event.

“I can’t answer that question because the club hasn’t made any decision,” Roger Schmidt, the coach of Leverkusen, said when reporters asked about Son competing in the Asian Games.