Yongsan betting center has residents up in arms

Yongsan betting center has residents up in arms 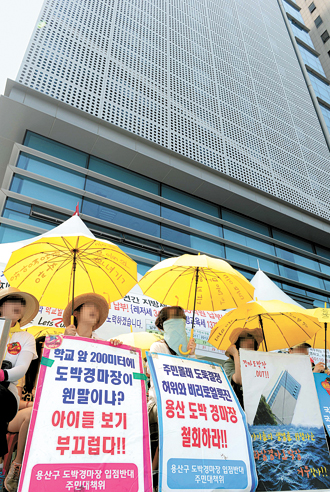 In a glitzy 18 story building in Yongsan District, dozens of people practice Yoga poses in one of its classroom. Since its establishment, other programs have been offered there, too, including singing lessons and sporting activities.

“It’s really nice to participate in these programs so close to my house,” said Seo Soon-ok, one of the Yongsan residents registered for the Yoga class.

“I am also taking ping-pong and singing classes here,” the 74-year-old added.

However, outside the building feels more like a battleground, and spontaneous rallies and banners condemn its use.

The new skyscraper is also set to be used as an off-track betting center originally located near Yongsan station.

But the plan to move instigated furor among Yongsan dwellers on the grounds that the new location would bring the gambling site too close to schools. In fact, in its new location, the betting center will be closer to six more schools than before.

Public anger has only intensified as the Korea Racing Authority test-operated on weekends despite residents’ opposition. During the weekdays, the building is mainly used for cultural activities and sports programs.

But those programs are hardly enough to cool down the frustration of the parents whose children attend the nearby schools.

“It’s been only a month since they [started to] operate. But we’ve seen drunken punters ramping and raging here,” said Jeong Bang, a 44-year-old woman who is the head of an organization that opposes the betting center. “My daughter told me that she feels really anxious whenever she passes by the site.”

Students from schools nearby also took to streets to protest the move.

“Many of my friends take the buses in front of the building,” said Bae Ji-min, a 12th-grader who attends Sungshim Girls’ High School in the district.

“My friends and I often talk about the betting center, and I heard many people say that they feel uneasy at the center,” she added.

Complicating the matter is the shift in the Seoul Metropolitan Government’s position.

The city government initially asked residents and the Korea Racing Authority (KRA) to come to a consensus, though it later requested that the KRA stop test-operations at the center and attempt to appease residents.

On July 20, Seoul Mayor Park Won-soon visited the building, where he acknowledged that the KRA had failed to reach an agreement with locals.

“The Korea Racing Authority said that it will convince Yongsan residents,” Mayor Park said. “But it didn’t put much effort into finding a middle ground. Rather, it just went ahead with its plans.”

However, the KRA argued that complaints from area schools were exaggerated, while emphasizing that it has tried its best to minimize any potentially detrimental effects.

“In response to parents’ worries, we decided to run the betting center only on weekends,” said KRA spokesman Hong Yong-hyun. “For the rest of the week, it serves as a community cultural center, where we have opened low-cost guitar, singing and English lessons.”

“The move is also legally sound because it is 200 meters away [from the schools], as required by law,” he added.