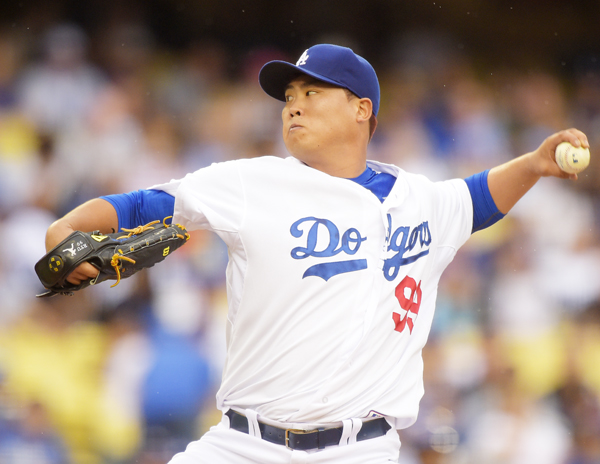 Los Angeles Dodgers starting pitcher Ryu Hyun-jin missed a chance to share the lead in Major League Baseball’s National League with teammate Clayton Kershaw and Adam Wainwright of the St. Louis Cardinals, who both have 13 wins.

During the Saturday match against the Chicago Cubs at Dodger Stadium, Ryu allowed two runs in seven innings while striking out six. He was also the winning pitcher until two outs in the bottom of the seventh inning, with a score of 2-1, but allowed a game-tying RBI double to Arismendy Alcantara. The only thing Ryu could enjoy was that he lowered his 3.44 ERA to 3.39 after the game.

Hanley Ramirez hit a three-run walk-off homer in the 12th inning, lifting the Dodgers to a 5-2 victory over the Cubs. With Dee Gordon on second and Justin Turner on first, Ramirez drove a 1-0 pitch into the Dodgers’ bullpen in left field, helping them to increase their NL West lead over San Francisco to three and a half games.

With Yasiel Puig and Adrian Gonzalez on the sidelines due to a day-to-day injury, Ryu didn’t get enough run support in the game. The scariest Dodger bat in the regular innings was Matt Kemp, who gave the team a 2-1 lead in the fourth with a two-run homer against Japanese import Tsuyoshi Wada, his 12th of the season and the fourth in the last five games.

Looking at recent games, one thing that worries those watching Ryu is that his changeup, which is his second pitch and has been his best weapon, hasn’t been as strong this season compared to last. The opponent batting average against Ryu’s changeup was only .161 last season but has skyrocketed to .306.

This was repeated again during this game. The pitch he allowed in the first run of the game in the top of the first inning was a changeup, as was the second run he gave up to Alcantara.

Ryu sometimes had a hard time getting his changeups to hit the areas he was aiming for.

“I threw three changeups in a row to Alcantara, but it didn’t hit the right spot,” Ryu said after the game. “It was a bit higher than I intended and he didn’t miss it. I’m not happy that I missed a chance to pick up my 13th win of the season, but one good thing was that I stayed until the seventh inning of the game.”

The pitches that have been helping Ryu to survive in his second MLB season are sliders and curveballs. The opponent batting average of his slider has improved to .207 this season from last season’s .236 and the curveballs also has risen to .256 from last season’s .290. Two of the six strikeouts against the Cubs in the game were from sliders.

After the game against the San Francisco Giants earlier this week, in which Ryu allowed a home run to Buster Posey with a changeup, the Korean player said he knows that his changeups haven’t been effective throughout the season and will try to improve on them, but it looks like he still hasn’t found a clear solution.

“Even though I allowed two runs with changeups, I feel like they are getting better,” Ryu said.