A year of controversy for Uber

A year of controversy for Uber 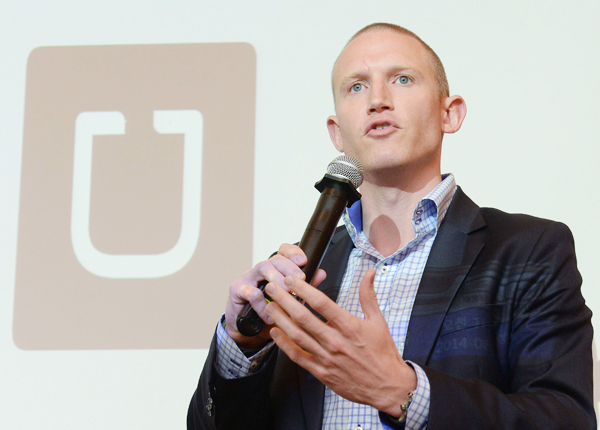 Allen Penn, Uber Technologies’ head of Asia, speaks at a press conference in Lotte Hotel in central Seoul yesterday. Provided by the company]

Uber Technology, a tech company that connects a person in need of a ride with an available vehicle through a GPS-enabled mobile app, plans to expand its business in Korea despite controversy including opposition from local taxi drivers.

Uber launched its service in Korea a year ago and works with about 70 private vehicles.

“Around the world Uber has a number of different types of customers,” said Allen Penn, Uber Technologies’ head of Asia, yesterday at a press conference for its anniversary of doing business in Korea, at Lotte Hotel in Sogong-dong, central Seoul. “We are currently rolling out Uber black service here, which specifically works with limousine companies.”

Penn added that “around the world, we have added additional services to allow other types of transportation and non-transportation businesses to utilize Uber technology to gain efficiency and earn more income.”

The 70 vehicles used by Uber in Korea pay 20 percent commission fees to Uber as its partner company.

The second part of the article states that no rent-a-car operator shall arrange a driver for the person who rents the car, unless the rentee falls under the exception, of a foreigner or disabled person.

Paragraph 3 says that no rent-a-car business shall use any of its commercial vehicles for passenger transport with compensation, or engage in brokering the activities when requested by a third party.

Article 81 of the same act elaborates on the ban on commercial transport by private cars.

Uber has also come under fire from taxi drivers in Korea, who say that the illegal business is intruding on their livelihoods.

“The market is already oversaturated with 160,000 general taxis and 8,400 black taxis available nationwide,” said Ha Jae-soo, a spokesperson form the Korea taxi cooperative. “If Uber connected these taxis with customers, the business would have been legal and it would have not encroached on the local business.”

Uber declined to comment on whether it will partner with local taxis instead of connecting users with rental vehicles and other commercial automobiles.

It has also been pointed out that the vehicles provided by Uber are not all covered by insurance in case of an accident.

“In terms of insurance, every car that works in the Uber system is properly registered to a limousine company, and they have prerequisite insurance to be legal on the road. Moreover, Uber’s policy globally is to ensure that all insurance is covered,” Penn said.

Taxation is also a problem for Uber in Korea. According to the Seoul Private Taxi Association, Uber neglects its legal obligation to pay taxes on its 20 percent commission, while local taxis must register and pay VAT and income taxes.

Uber is also facing controversy for its registration process, which requires credit card information that could be leaked.