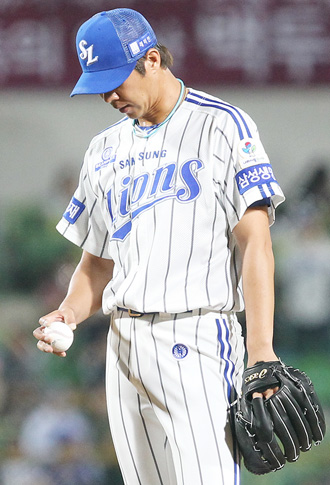 Pitchers selected to the Korean national baseball team who will compete in the 2014 Incheon Asian Games in September have been struggling, giving a headache to Manager Ryu Joong-il, who is aiming for a gold medal.

In a Wednesday game against the Hanwha Eagles, the Samsung Lions manager had to watch closer Lim Chang-yong, who will have that role on the national team, blow a 2-1 lead by allowing a leadoff solo home run to Cho In-sung in the bottom of the ninth.

It was his eighth blown save this year, the second most in a single season in KBO history. Woo Kyu-min of the LG Twins blew 13 saves in 2007.

There were plenty of questions when Lim was included on Ryu’s final 24-man roster, along with LG Twins closer Bong Jung-keun, who has blown four saves of his own this season.

But Lim had four consecutive saves to convince Ryu that he deserved a place on the national team, then promptly squandered two of three save opportunities. After the Wednesday game, Lim was 5-2 with 22 saves and a 5.08 ERA.

His eight blown saves lead the league, two more than a group that includes Lee Yong-chan of the Doosan Bears, Bong and Yoo Won-sang of the Twins. All three are going to the Asian Games.

The closer position was one of the biggest problem areas for Ryu when filling the national team roster. KBO closers such as Sohn Seung-rak of the Nexen Heroes (2-3/23 saves/4 blown saves/4.42 ERA) have been struggling throughout the season.

Ryu chose Lim because of his big-game experience in international competitions such as the World Baseball Classic and the Olympics.

But Lim isn’t the only concern for Ryu. The starting rotation of Kim Kwang-hyun (SK Wyverns), Yang Hyun-jong (Kia Tigers) and Lee Jae-hak (NC Dinos) is a huge question mark.

Tigers ace Yang is predicted to start either in the semifinals or final game if the team qualifies in the preliminary rounds. The lefty starter had a great first half with a record of 9-4 and a 3.67 ERA, but his ERA in six second-half starts is 5.67 and he has shown signs of fatigue and problems with his control. Over the past three years, Yang threw an average of 84.3 innings a season due to a series of injuries, and this year he has pitched 129. Regardless, Tigers Manager Sun Dong-ryeol can’t afford to give his ace a little extra rest when the team is in a battle to make it to the postseason.

After being named rookie of the year in 2013, Dinos’ side-arm pitcher Lee, who is predicted to be the team’s third starter to go against weaker opponents, was selected for the national team. In five starts in July, though, he picked up two wins and had a 5.55 ERA. For the season, he is 9-4 with an ERA of 3.91.

Hanwha Eagles rising star Lee Tae-yang is expected to be utilized as a fourth starter or swingman, but his performance in July was another disaster as he went 1-4 with an ERA of 10.33 in six games.

“The question is whether Manager Ryu has a backup plan, which must be difficult,” said analyst Kim Jung-jun. “The league continues until five days before the event kicks off [Sept. 20]. It seems like not enough time for tired players to regain their stamina.”