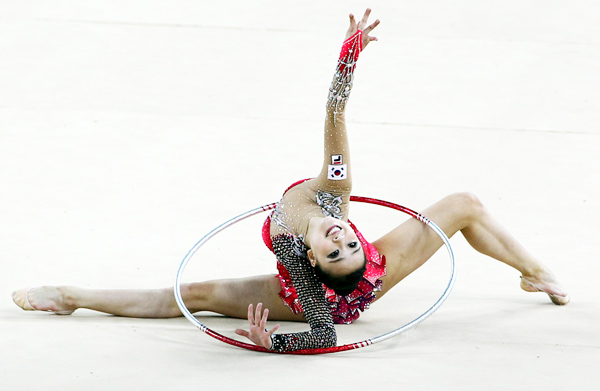 Rhythmic gymnast Son Yeon-jae, who is aiming for a gold medal in September’s Incheon Asian Games, has won bronze in the individual all-around at an international competition in Bulgaria.

In the FIG (Federation Internationale de Gymnastique) Rhythmic Gymnastics Dundee Cup held on Saturday local time, the 20-year-old took third place with a total score of 70.25 points: 17.55 points in hoop, 17.55 points in ball, 17.35 points in clubs and 17.60 points in ribbon.

Since she is shooting for a gold medal in Asia’s biggest sporting event next month, her biggest concern is 22-year-old Chinese star Deng Senyue. In last year’s world championship, Deng finished fourth, ahead of the fifth-place Son.

In preparation for the Asian Games, she competed in a World Cup event in June and focused on her training in Croatia in July. There, she spent most of her time addressing several minor injuries and improving her technique.

“Son has been trying to develop more muscle while reducing her body fat,” said analyst Cha Sang-eun. “She has been maintaining her weight between 47 kilograms (103.6 pounds) and 48 kilograms. Part of her training regimen is having a meal of only milk, salad and fruit. She was able to improve her power and speed, which helped her to maintain concentration until the very last moment of each program.”

Deng did not participate in many events while Son was trying to get ready for the Incheon games through a series of international competitions earlier this year. There were rumors she might retire, but she competed in a World Cup event in France in May, finishing eighth with a total score of 68.182 points in the individual all-around. She then participated in the Dundee Cup, where her score was .032 points lower.

“I heard the Chinese gymnast was suffering from an ankle injury,” said analyst Seo Hye-jung. “It looks like she has gained some weight and that might have caused her to not perform her best.”

Son did not achieve one of her goals: to score higher than 18 points in at least one event, but she avoided major mistakes, and that gives Koreans reason to to dream of a gold medal for Son in the Asian Games. She won a bronze medal in the individual all-around at the 2010 Guangzhou Asian Games.

She will participate in two more international events next month leading up to the Incheon Asian Games.