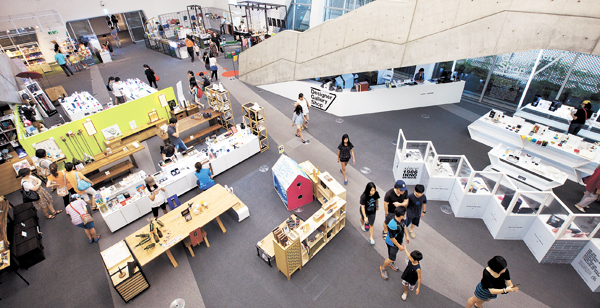 Visitors to the Dongdaemun Design Plaza in central Seoul browse products at the Design Lab section of the complex. Initially much of the place was supposed to be devoted to showcasing the works of independent designers, but it turned into a cluster of booths that sell products of design companies. By Park Sang-moon

From a distance, it looks like it could be something out of a fictional dystopian world or a disturbing UFO, but since its establishment, many here have praised it as an embodiment of experimental architecture, representing a futuristic ethos.

While the debate continues over the exterior of the 484 billion won ($470 million) Dongdaemun Design Plaza, the enormous cultural complex that opened in March, Park Su-ji, a 22-year-old industrial design major, is more interested in how it will serve aspiring designers like her.

The much-proclaimed role of Dongdaemun Design Plaza (DDP) - as explicitly expressed in its name - was to support and promote up-and- coming designers by allowing them to feature their work and connect with customers and major industry players. The objective appeared to be in harmony with its surroundings as the design center is located near the country’s largest fashion district - located near Dongdaemun History and Culture Park Station.

It also seemed necessary in a country like Korea, where many designers struggle to find places to showcase their work.

Within just four months since its opening, Park has already visited the complex twice. But on her second trip on Aug. 1, she had difficulty hiding her disappointment. The building feels more like a large multi-purpose community center, rather than arts hall, she said.

“From the beginning, my friends from university and I kept up on the news about Dongdaemun Design Plaza, and we were filled with expectation,” she said. “Because the government rarely invests in anything related to art and design, we thought it was a rare opportunity for us.”

But what she encountered in the main art hall that day was an exhibition featuring a set from the popular drama “My Love from the Star” and related sale items.

“I have no idea what this building is all about. I think the exhibition’s primary target will be Chinese tourists,” Park continued, “and the admission fee is 15,000 won, so expensive for students.”

Another exhibit, “The 30th Anniversary Transformers,” which displays artwork and illustrations from the franchise, seems somewhat more relevant, though also at 15,000 won, it could again feel like a luxury for some.

Park’s disappointment captures the challenges facing the new landmark building: Its ambiguous function and commercially oriented aspects, issues that have resulted from inconsistent policy planning caused by the transition in Seoul’s mayors.

In 2006, former Seoul Mayor Oh Se-hoon initiated the plan to turn the site of the Dongdaemun Stadium into “the world’s top design hub.”

The Seoul Metropolitan Government gathered officials, architects and designers the following year to come up with a more specific plan for what functions it would serve.

Based on remarks by the former mayor and the draft plan, much of the complex was to be devoted to cultural space - and was broadly defined as a design center that would support emerging designers.

However, the initiative took a radical turn when Oh resigned over a failed referendum on free school lunches. Current Mayor Park Won-soon, who was reelected in the June 4 local elections, first took over the post in 2011 after he won in a by-election.

As soon as he took office, Park argued that the planned profit system for the complex was destined to generate a loss, and would siphon off a great deal of the budget for its operation.

Park launched a new division of officials to revise the plan and asked the task force to come up with a new profit structure, in which the project could maintain financial independence from the Seoul government.
Presently, Seoul Design Foundation, a body affiliated with the municipal government, operates the DDP, while the city government oversees the management and funds the operating expenses through this year.

The Seoul Design Foundation said that it will operate the DDP by itself next year without the city government’s financial support.

Under the new plan by the current mayor, the 86,574-square-meter (931,874-square-feet) establishment is comprised of five halls: the Art Hall, the Design Lab, the Design Market, the Dongdaemun History and Culture Park, and the Museum.

Product design companies currently rent out space in the Design Lab and the Design Market, selling edgy items including star-shaped chairs and custom notebooks and watches.

The Art Hall is rented for various exhibitions, not exclusively art showcases. The rental fees are three times more expensive than that of Coex in Gangnam, southern Seoul or Kintex in Ilsan, Gyeonggi. The goods sold in the place have a higher price tag as well, with a table clock selling for 60,000 won and a cell phone case costing more than 30,000 won.

The revenue from the rent by those companies and exhibition agencies will likely help the foundation to be more financially sound and operate on its own. But the change in focus has made the DDP into a more mundane commercial place.

The centerpiece of the Design Lab is a cluster of booths and tables at which design companies such as 1300k and Momot sell their products.

“When I first heard of the DDP and saw its interior, I expected there to be more artistic aspects inside as well,” said Kim Myung-seon, 34, who visited the space with her family.

“For example, I imagined more artsy items featured by lesser known, independent designers and more interaction with actual designers,” she continued, “But here it’s more like a selling place for high-end design companies.”

Park, the design student, also pointed out that the products featured have barely changed since her first visit in March.

“If the DDP is to appeal to its visitors with those goods, the items need to be regularly changed because visitors always want to see something new,” she said. “But I essentially saw the same line of products that I saw during my first visit.”

Mayor Park proclaimed that the DDP would be a primary tourist destination in Seoul, though by all appearances, it seems the establishment is not fully ready to accommodate foreign visitors. Some of the items in the Design Lab are attached with instructions, but they are offered only in Korean. 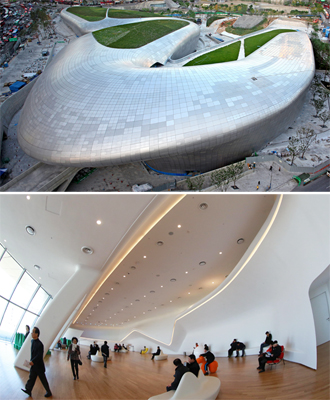 Top: The unique shape of Dongdaemun Design Plaza has drawn both criticism and praise., Above: The DDP is characterized by asymmetrical, three-dimensional design, but this aspect also makes it hard to find directions inside.[JoongAng Ilbo]

“I would like those goods and designer products to have some explanation in English,” said Aroonrojana Prasaertseung, a 25-year-old Thai tourist.

“I could see items that were unique and unconventional, but I have no idea what they are used for,” she continued. “Instead of just a plain explanation, it would be nice if I could learn about the designers’ inspiration and [the products’] specific functions.”

She also took notice of the price.

“I thought it would be nice if I could find some souvenirs here, but all the goods on display are too expensive, so I couldn’t buy one,” she said.

One worker at iFace, a cell phone case shop there, admitted that not many visitors would buy their items.

“Since it’s vacation season, a fair number of people come and go,” said the employee, who requested anonymity. “Only a few people would actually buy one. I often hear people say ‘it’s so expensive.’”

Also largely absent were signs in foreign languages. Given that the complex is three-dimensional and asymmetrical, visitors often get lost inside and look for sign boards.

“It was really tough to find the place I wanted to go. It felt like a labyrinth,” said an American tourist who would only give her family name Swanson. “This place definitely needs more signboards for directions, or a guide.”

The Seoul Design Foundation, however, has said that it will find ways to improve its infrastructure and services.

“This is only the beginning period,” said Bae In-hye, a public relations official with the foundation. “We are listening to what people have said about Dongdaemun Design Plaza and trying to reflect their opinions.”

While not everyone is completely satisfied with the project or its design, it is still too early to declare it a complete flop.

The number of visitors to the plaza exceeded three million as of Aug. 3, far higher than the target set by the city government.

Many have criticized the DDP for not blending well with its surroundings, though a number of visitors have praised the design.

“When I saw an aerial photo of the building, it just looked weird,” said Han Min-jeong, 28. “It looks really conspicuous, but once I came and saw what it was, I thought this building was really cool.”

“I particularly admire the expansive, wide space everywhere, and the structure is asymmetric, which gives some vantage points for observing objects and the landscape,” she added.

The foundation explained that upcoming events - more relevant with the notion of design and creativity ? will be held in the coming months.

“We will host Seoul Fashion Week in October. And in mid-August, we will have an exhibition on the sources of inspiration for renowned fashion designer Coco Chanel,” Bae said.

She added that the exhibition by the Kansong Art Museum, which promotes historically significant Korean relics, is popular. Originally founded in 1938 by collector Jeon Hyeong-pil (1906-62), the museum was meant to preserve historic items during the Japanese imperial period, and the organization has traditionally held free exhibitions biannually, staying closed for the remainder of the year.

Still, experts warned that the DDP needed a more lasting vision to become a key landmark in Korea. “Because of the flip-flopping in planning, the identity of the DDP is now rather vague,” said Kim Kyung-min, an urban planning professor at Seoul National University. “Since the direction was changed in the middle of the project, many were focused on how to save operating expenses. There should have been more discussion on how to define the character of the DDP and its functions.”

“The DDP should exhibit something unique,” he added, “something that can define its character.”