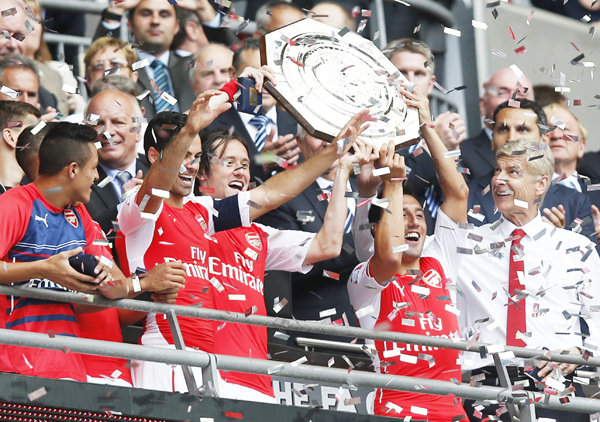 Arsenal, which went nine years without a trophy before winning the FA Cup in May, collected its second piece of silverware in three months by crushing champions Manchester City 3-0 in the Community Shield at Wembley Stadium on Sunday.

Arsenal thoroughly deserved its emphatic win in the traditional curtain-raiser to the new English season with goals from Santi Cazorla after 21 minutes, Aaron Ramsey after 42 and a stunning long-range third from Olivier Giroud just past the hour.

City was without seven players who were in the World Cup, while Arsenal was missing its three German World Cup winners Mesut Ozil, Per Mertesacker and Lukas Podolski.

But the Gunners, fielding three rookies and 35-million-pound ($58.71 million) striker Alexis Sanchez, were far sharper than City, who look like they have plenty of work to do before the start of the new Premier League campaign next weekend.

Arsenal went ahead when a neat move on the edge of the box involving Jack Wilshere ended with Cazorla shimmying to his left and scoring with a low-angled shot that eluded rookie City goalie Willy Caballero.

Cazorla, who went 19 matches without a goal last season before scoring Arsenal’s first in the 3-2 FA Cup final win over Hull City, made it two goals in two matches at Wembley with an unerring touch, and he combined well with Wilshere before going off in the second half.

Arsenal never loosened its grip, and 21-year-old French striker Yaya Sanogo, who failed to score in 14 appearances last season, should have made it 2-0 four minutes later, but wasted an opportunity by dragging his shot wide.

Sanogo held off City defender Dedryck Boyata before laying off for Ramsey who controlled the ball with one touch and powered it into the net for another Wembley goal.

Chilean Sanchez, bought from Barcelona to provide more firepower for Arsenal, played wide on the right and had a quiet half, but showed some clever touches before leaving at halftime.