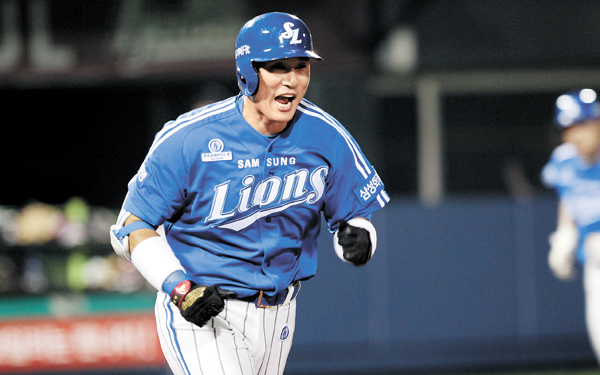 Last season, 37-year-old Samsung Lions slugger Lee Seung-yeop didn’t perform like a “Lion King” - the nickname fans had given him - on the field. He struggled with fastballs and swung at breaking balls that were out of the strike zone.

When he finished the season with a .253 batting average and 13 home runs, the fewest of his Korea Baseball Organization career, insiders and fans saw it as the end of an era for the player once considered the best Asian slugger and who holds the KBO home run record of 56, set in 2003.

Not only are his numbers better this season but Lee is showing his ability in clutch situations like he did in the past.

In the 2002 Korean Series won by the Lions four games to two, he blasted a three-run home run to tie Game 6. On Monday against the Nexen Heroes, Lee hit a two-run homer that gave the Lions a 2-1 lead in the top of the second inning, then singled in the winning run in the top of the 10th in a 7-6 victory.

“It might be a little early to say this, but with yesterday’s win the Lions look like they have won the pennant race for the fourth consecutive season,” analyst Kim Jung-jun said yesterday.

With 35 games remaining, the Lions were leading the second-place Heroes by eight games after Monday’s win. An added bonus was that Lee’s home run was the team’s 3,900th, making the Lions the first KBO club to reach that mark. Lee hit 383 of them.

During spring training, Lee attracted the attention of reporters with a different approach at the plate, focusing more on making contact than going for the fences. 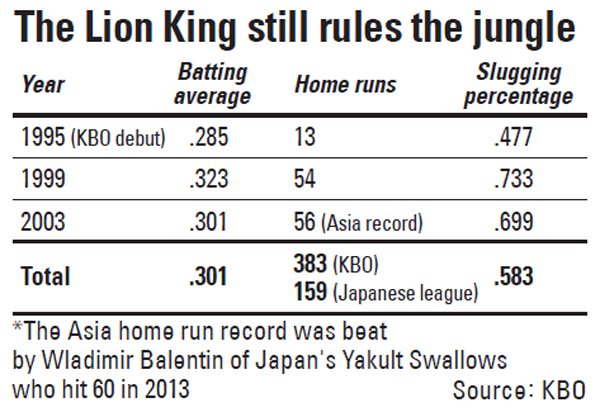 Lee has made adjustments to his swing throughout his career, the most notable being what he learned from his former manager, Baek In-cheon, the only player to hit over .400 (.412) since the KBO was established in 1982.

With the bat cocked straight and his hand close to his left ear, he raised his right leg belt-high when the pitcher was in motion to attack the ball.

“With such mechanics, a hitter is able to collect his power, and Manager Baek taught him because he saw Lee had the potential to be the league’s best slugger,” said Kim.

But this season, he dropped the bat to shoulder level and has not been raising his leg.

“I think that has helped Lee to deal with fastballs as it gives him more time to watch the incoming pitch,” said Kim. “When a player reaches his late 30s, he loses some physical power and bat speed, but it looks like Lee is adjusting to that with his new form. It is very hard to adopt a new technique for an old power hitter like Lee, who once dominated Asia.”

At the beginning of the season, Lions Manager Ryu Joong-il dropped Lee to sixth in the batting order, with Chae Tae-in, Choi Hyung-woo and Park Suk-min in the third through fifth positions. After more than a decade, he is no longer the team’s cleanup hitter.

“When fans still think of the Lions, the first player who pops into their heads is still Lee,” said Ryu. “Since he is well aware of that, I wanted to ease the pressure on him a bit.”

“Every time I’m at bat, I feel so relieved when I see Lee on deck, because it feels like he will bring us a hit if I fail to do the job,” said Park, who mostly hits fifth.

The four players have combined for 82 home runs and 292 RBIs so far this season.

If Lee finishes the season with a .300 average, 30 home runs and 100 RBIs, he will be the oldest KBO player to achieve those numbers since 36-year-old Felix Jose of the Lotte Giants in 2001.