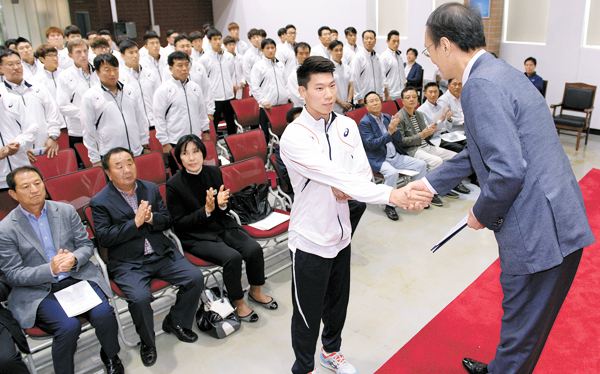 The Korean national track and field team pledged to perform its best in the 2014 Incheon Asian Games that kick off next month, with the goal of winning at least 18 medals.

In previous Asian Games, the Korean track team has won 112 medals - 33 gold, 31 silver and 48 bronze. The team clutched the most medals in the 1986 Seoul Games with 25 - seven gold, five silver and 13 bronze. In the 2010 Guangzhou Asian Games in China, Korea claimed four gold, three silver and three bronze.

“Since a total of 47 medals are waiting for athletes in the track and field events, we have to try our best to win as many medals as we can,” Kim Bok-joo, general manager of the national track team, said at the event, which was organized by the Korean Association of Athletics Federation.

“Korean runners have not been impressive since Hwang Young-jo won a gold medal in [the 1992] Barcelona Olympics, but as it is a home event, I promise athletes we will give our best support during the event and also want to ask them to perform their best for the nation.”

Korea wants to win at least three gold from either the men’s 400-meter relay, men’s race walking, men’s long jump, women’s 100-meter hurdle or the men’s pole vault. There are high hopes for gold in the relay after the team recently set a new Korea record of 38.74 seconds, the 14th-fastest record worldwide this year, in a friendly event participated in by Korea, China and Japan.

The team, consisting of Kim Kuk-young, Yeo Joshua, Oh Kyung-soo and Cho Kyun-won, expects to improve its record to 38.50 seconds before the Asian Games so they can get closer to gold.

In the men’s 20-kilometer race walking, Kim Hyun-seob and Choi Byung-kwang will go for gold while teammate Park Chil-sung will compete in the 50-kilometer event.

Kim Deok-hyun will aim for gold in the men’s long jump and Lee Yeon-kyung, the 2010 Guangzhou Asian Games gold medalist in the women’s 100-meter hurdle, wants to repeat that triumph in Incheon. Her biggest rival, Chung Hye-rim, has the same goal.

The Incheon Asian Games kick off on Sept. 19 and track events begin Sept. 27.