Tire makers earnings drop in Q2 due to strong won

Tire makers earnings drop in Q2 due to strong won 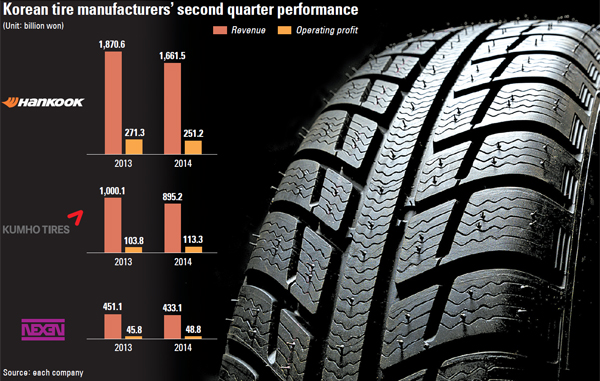 Korean tire manufacturers saw a drop in their second-quarter earnings, partially due to the strong Korean won, but they maintained a solid operating profit ratio thanks to a drop in the price of raw materials.

For the second quarter, Hankook Tire reported a below-average performance with revenue at 1.66 trillion won ($1.6 billion), down 11.2 percent from a year ago, while operating profit plunged 7.4 percent year-on-year to 251.2 billion won.

“Continuing retail price drops due to price competition and currency exchange rate changes that lower the value of the Korean won are the main reason for revenue slump,” said KDB Daewoo Securities analyst Park Young-ho in his report.

“Until last year, the company focused on improving its financial structure, but from this year, it is trying to improve its sales capability,” said Korea Investment & Securities researcher Kim Jin-woo. “It is a promising result with a low plant operation rate compared to its rivals.”

“We think this is a sound performance given the strong Korean won and shrinking consumption due to the continuing global industry slump,” said a spokesman from the company. “In particular, sales of our original equipment [OE] tires to global automakers increased 39.6 percent from a year ago.”

Although the second quarter performance wasn’t a major success, industry observers said that Korean tire companies have managed to gain in their operating profit ratio due to a drop in the price of raw materials.

Despite a drop in both revenue and operating profit, Hankook managed to keep its operating profit ratio at 15.1 percent in the second quarter, the highest among local tire companies, and also maintained a 15 percent profit margin for two consecutive quarters.

Nexen had an operating profit ratio of 11.3 percent in the second quarter, up 1.1 percentage points from a year ago.

The three tire manufacturers’ operating margin compared to sales is higher than average companies in Korea. According to data from the Bank of Korea, the average operating profit ratio in the manufacturing industry was 5.7 percent last year.

Their operating margin is also impressive when compared to huge companies such as Samsung Electronics and Hyundai Motor, which marked an operating profit ratio of 13.9 percent and 9.2 percent in the second quarter, respectively.

According to local analysts, the price of natural rubber and synthetic rubber in the second quarter dropped 22 percent and 10.9 percent, respectively, compared to a year ago, which reduced the cost of production.

They said that low raw material costs are likely to continue but retail price drops due to fierce competition are still a concern. However, as the global market is likely to recover as the auto market improves, local tire companies remain hopeful.

“Around markets like the U.S. and Europe, there is a signal that demand in the OE market and replacement equipment [RE] market is recovering,” said KDB Daewoo Securities’ Park. “It is also positive that sales of winter tires will be starting from the third quarter.”

Korean companies also could benefit after the U.S. International Trade Commission makes its preliminary decision next month on anti-dumping and countervailing investigations into Chinese tire imports, which may lead to higher tariffs on those tires.

“If the U.S. decides to impose tariffs, the U.S. dealers will change their supply channel and this will bring positive results to Korean tire manufacturers’ fourth-quarter performance,” said Samsung Securities’ analyst Yim Eun-young. “Among Korean companies, Nexen Tire, which has a high portion of its total sales in the U.S. and competes with Chinese tires, will likely benefit most.”

In the meantime, Korean tire companies are hurrying to expand their overseas plants to minimize the impact of the strong Korean currency.

Hankook recently confirmed that it will build its first U.S plant in Tennessee with an annual production capacity of 11 million tires by 2016. Kumho, which is expected to finish a debt workout program this year, received permission from its creditors to resume construction of a plant in Macon, Georgia.

Nexen signed a $1.1 billion deal with the government of the Czech Republic to build a plant that can produce 12 million tires. The plant is expected to begin commercial operations in 2018.