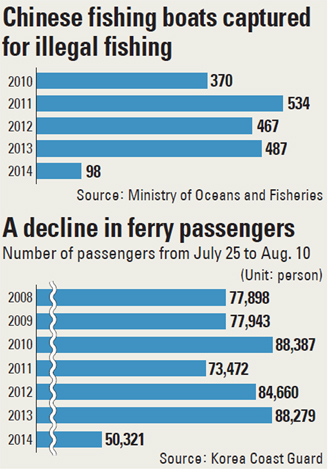 Four months after the Sewol ferry disaster, maritime safety reforms remain at a standstill as the Korea Coast Guard and the Ministry of Oceans and Fisheries struggle to handle the aftermath of the accident.

The two organizations received the brunt of the blame following the tragedy, which left more than 300 people dead, mostly high school students.

The Coast Guard says its morale has suffered since it was publicly chastised by President Park Geun-hye, who announced shortly after the disaster that the maritime authority would be dismantled over its botched rescue operations. In the wake of the disaster, the Coast Guard was considered the authority in charge of search and rescue missions for those still missing aboard the ship. The agency put most of its manpower and equipment toward handling the case.

Aside from safety and rescue operations, the Coast Guard’s responsibilities are widespread, and some now fear that too much focus on the Sewol case has had ill side effects on the organization, and shifted its priorities.

The Coast Guard is traditionally tasked with preventing Chinese fishing vessels from infiltrating South Korean waters, for instance, though the number of vessels apprehended in recent years has been noticeably lower. The agency caught 467 Chinese ships in 2012, and 487 in 2013, though this year officials have only apprehended 98 so far.

Because the Coast Guard dispatched most of its large vessels for search operations in the vicinity of Sewol ferry accident, the areas that must be patrolled by the remaining ships is incredibly large. In some cases, ships must patrol distances of over 100 kilometers (62 miles), from Incheon to Taean, South Chungcheong, for example.

The number of early retirement applications has also been indicative of the organization’s downward trajectory. After the accident, 85 Coast Guard personnel volunteered to retire early. That figure was only 38 in 2011, 12 in 2012 and 42 last year.

“I have lived all my life being proud that I am a coast guard, but I decided to retire because I felt regretful that we were suddenly deemed immoral and incapable,” said a 56-year-old retiree. “If the government does not provide [the Coast Guard] another chance and dismantles the organization, how many other governmental organizations will survive?”

After the Sewol tragedy, the president promised far-reaching nationwide reforms, vowing to eradicate long-practiced corruption that could harm safety.

Yet, maritime safety regulations have so far been unremarkable.

Ferry safety regulators, who monitor ships before they depart, still belong to the Korea Shipping Association, an inspection body connected with the shipping industry - in line with conditions before the accident.

As a result, critics argue inspectors cannot properly audit ships in accordance with safety regulations and insist that such lax management resulted in the deaths of the more than 300 passengers aboard the Sewol.

The Korean Register of Shipping has also managed to keep its exclusive rights to conduct overall safety examinations on ships. The inspection agency was searched by the prosecution after its poor examination of the Sewol ferry, though the ministry has not yet stripped the agency of its rights.

A series of measures have been proposed, and numerous suggestions have been made as to what can be improved, though all of those discussions are pending.

The ministry has put the blame on the National Assembly for postponing the implementation of crucial decisions, saying it can’t make revisions to regulations until lawmakers agree on the terms of a special Sewol law, aimed at finding the cause of the disaster.

“People are afraid to use ferries because authorities think they should come up with measures only after the investigation is over,” said Professor Kim In-hyeon, who teaches maritime law at Korea University. “But such measures should be made alongside the investigation.”