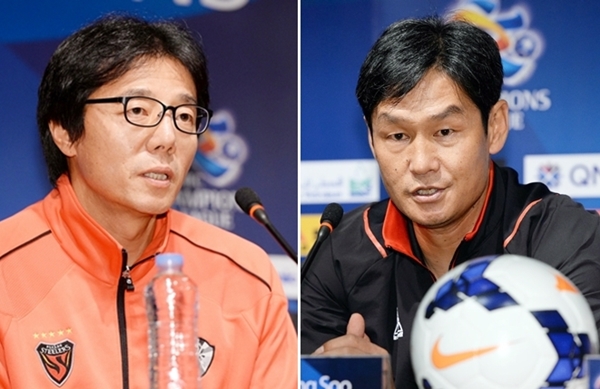 Two young coaches considered to be the K-League Classic’s best leaders with unparalleled resources will meet in a final showdown tonight on their path to the semifinals of the Asian Football Confederation Champions League.

At 7:30 p.m. at World Cup Stadium in Sangam-dong, western Seoul, the second leg of the quarterfinals between FC Seoul, led by Coach Choi Yong-soo, and Pohang Steelers, led by Coach Hwang Sun-hong, will decide which team will clinch one of four semifinal spots.

The Steelers have the edge in the two-game series after they drew 0-0 in the first match at home a week ago. The Steelers will advance to the semifinals of Asia’s biggest club football event if they draw with at least one goal in accordance to the away goals rule, a method of breaking ties in football competitions in which teams face each other twice.

The winner will be determined based on the strategies the coaches bring to the field. The Steelers’ Hwang has informed fans that he will use all of his firepower tonight after giving 10 of his 11 best players a full day of rest in the K-League Classic’s Round 22 match against the league’s last-placed Gyeongnam FC on Saturday, in which the team drew 0-0.

“Every single person on the team knows how important [tomorrow’s] match is,” Hwang told the media at World Cup Stadium yesterday. “I think the game will be decided by one goal, so we will try everything we can to score, and I think we are ready to move forward.

“I know that FC Seoul has been outstanding lately, but we haven’t lost to them this season, which will put huge pressure on them. We started the season with the goal of becoming the Asia champ and no one can stop us.”

Hwang, who usually favors a 4-2-3-1 formation, tried out a three-back defensive formation against Gyeongnam FC, but he is predicted to return to his four-man defense tonight. Forward Kang Soo-il (four goals in 16 league matches), midfielder Kim Seung-dae (eight goals in 21 league matches) and Son Joon-ho will lead the team in their search for a goal.

“I think the stork will fly higher than the eagle tomorrow,” said Son, who accompanied Hwang to the stadium. “We have been stronger than Seoul in the tournament.”

Hwang’s nickname when he was a player was “stork” and Seoul Coach Choi was called “eagle.” Both coaches were among the country’s best strikers until their playing careers ended in the early 2000s.

Coach Choi also gave many of his best players a rest from their weekend league match against the Jeonbuk Hyundai Motors. Core players such as Colombian forward Mauricio Molina and defender Cha Du-ri started the match on the bench and Spanish forward Sergio Escudero, midfielder Kim Jin-kyu and defender Kim Chi-woo were excluded from the lineup. And without them, Seoul still beat the league-leading Motors 2-1. The rested players are sharpening their swords to ensure a dramatic victory at home.

“We will bring every possible option onto the field to advance to the next round,” Choi said. “We were so close to reaching our dream of becoming the Asia champ last season, and I think our players still have that dream inside their hearts.”

FC Seoul midfielder Choi Hyun-tae, who was at the stadium with his coach yesterday, had a retort for the Steelers’ Son: “I think an eagle always beats a stork in nature, doesn’t it? We have been in much better shape lately than the Steelers ... so we are very confident about winning this match.”