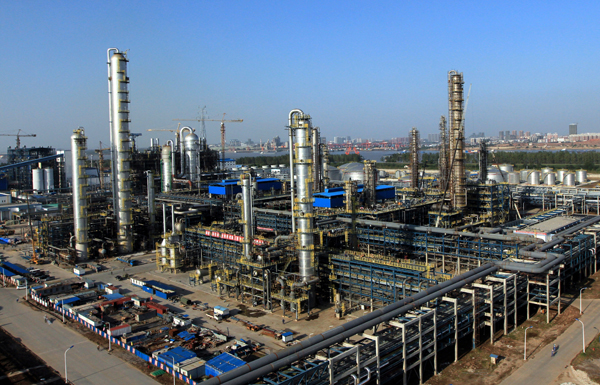 Earlier this year, Kim Chang-geun, chairman of the Supex Council, SK Group’s highest decision-making body, said that the group will aim to raise its corporate value to 300 trillion won ($29 billion).

In order to boost the company’s global business, which took up more than half of the conglomerate’s total sales, SK affiliates push to succeed in fields such as ICT, energy and chemicals. For overall development of SK’s ICT sector, the group hired former Samsung Electronics executive Lim Hyung-kyu as vice chairman of SK Hynix, the chipmaker under SK Group. Lim is in charge of planning for the conglomerate’s future in business.

SK Hynix plays a leading role in the global memory chip market. Ever since SK acquired the chipmaker in 2012, the group poured in several trillions of won to transform its production base into high-technology plants.

In addition, the company raised its competitiveness in the flash memory market by acquiring Link A Media Devices, a California-based NAND flash memory chip maker. Establishment of its research center in Italy was also a part of its effort to bring up the quality of its flash memory products. Such endeavors resulted in the innovative of products such as the 16-nano NAND flash, 6-Gigabit LPDDR3, 8-Gigabit LPDDR3 and 20-nano 4-Gigabit Graphic DDR3.

For its energy and chemicals sector, SK plans to invest in businesses such as petroleum development, batteries and new materials for electronics.

China is the main target for its chemicals business. SK recently built an ethylene plant in Wuhan with its Chinese partner Sinopec, the largest state-run petroleum group. Ethylene is a base material for many petrochemical products. Its joint venture with Spanish company Repsol to build a lube base oil plant in Cartagena, southern Spain, is also about to see its results as the plant will begin operating later this year. The two plants are a bridgehead for SK to advance in both the Chinese and European markets.

SK’s energy affiliates are also participating in various businesses abroad. Last April, SK took over the managerial rights of two oil blocks in the United States. This is a new step for SK Innovation, the holding company of the group’s oil and energy affiliates.

SK E&S, the gas company, began working on its business to import liquefied shale gas from the United States starting from 2019. The shale gas business is expected to create more added value as it has the potential to develop the vertical integration of LNG-related jobs such as transportation, storage and distribution.

SK’s information electronics materials like the lithium-ion battery separator (LiBS) are also popular in the international market. One in five laptop computers and mobile phones are made using SK Innovation’s LiBS, which have more than 600 billion won in accumulated sales.