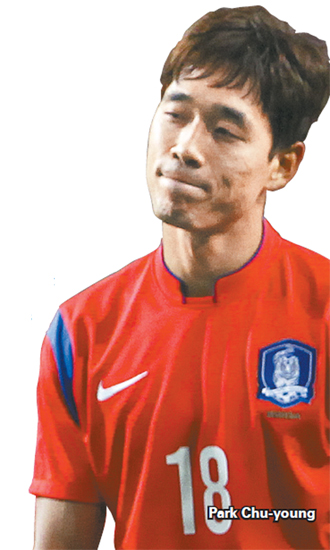 Striker Park Chu-young, who was once considered the country’s best attacker, has disappeared from Korean football. Coaches and teachers who once played with him are worried that the country is about to - or already has - lost one of its best attacking options.

When the 22-man roster for the national team’s two A-level matches against Uruguay and Venezuela was announced on Aug. 25, Park’s name wasn’t there, even though the team was lacking offensive players badly enough to call up 36-year-old veteran Lee Dong-gook of the Jeonbuk Hyundai Motors.

The summer transfer period ended last month and the 29-year-old striker failed to find a new club to join. There were rumors that clubs in Turkey and China were interested in signing Park, but they didn’t come to fruition.

In recent years, rumors have spread that clubs in England and Spain consider Park a difficult player to control and teams in Germany’s Bundesliga have said his salary is too high. He received about 76 million won ($74,935) per week when he played for Arsenal in the English Premier League.

Why has Park failed?

Cho Kwang-rae, the former Korean national football team coach, named Park captain in 2011. He was always Cho’s first attacking option, but Cho’s evaluation of the striker wasn’t the same when Ilgan Sports, an affiliate of the Korea JoongAng Daily, asked about him last week.

“He didn’t try to change,” Cho said. “The trend of football strategies changes quickly, but he has been the same type of player he used to be 10 years ago. In recent football, it is required that attackers help defenders often. The trend was one of the reasons why great foreign players such as Fernando Torres [Chelsea] started falling and are not favored by their coaches.”

Ulsan Hyundai Tigers Coach Cho Min-kuk, who coached Park at Korea University, said the striker does not seem motivated. “I don’t actually feel that he wants to play football desperately like other players who are trying every second to catch their coach’s eye and to get on the field, even for a few minutes,” he thundered.

Time for a comeback

Football analysts say the best time in a striker’s career often comes between the ages of 29 and 33. Park is 29.

“Not playing during the best time in his career is such a huge loss not only for Park himself, but also for Korea,” Cho said. “I strongly suggest that he comes back to Korea to play in the K-League Classic.”

Huh Jung-moo, who coached Korea to the Round of 16 in the 2010 South Africa World Cup in which Park played, said he thought the striker needed help.

“There are opinions that his character left him isolated, but we should know that great players like him have a distinct personality compared to ordinary people. Because he is still a valuable asset for Korean football, we should make him feel more comfortable to encourage him to play more.”

Cho added that Park needs to be open to change. “He should know that his playing style has many things that can be improved. He should watch his plays from the last few seasons and he needs to study what he should work on. He must run twice as hard as he used to and should try to be more involved in the game.

“A chance to play somewhere will not just be given to him one day like a Christmas gift if he doesn’t show passion for football.”