28 years after the ‘hand of God,’ Maradona plays for pope

28 years after the ‘hand of God,’ Maradona plays for pope 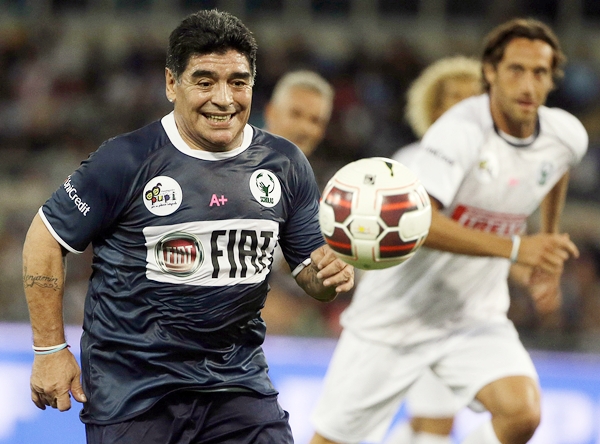 Diego Maradona controls the ball on Monday during an inter-religious soccer match for peace, supported by Pope Francis to promote dialogue among religions, at Rome’s Olympic Stadium. [AP/NEWSIS]

ROME - Diego Maradona and Roberto Baggio were among a host of former soccer stars who played in an interreligious charity match Monday night backed by Pope Francis.

The Argentine pope, an avid soccer fan, did not attend the match but had an audience with both teams earlier in the day and broadcast a message on the big screens at Rome’s Olympic Stadium ahead of kickoff.

The idea arose during an audience former Argentina great Javier Zanetti had with Francis last year and, as well as promoting peace, the game raised money for at-risk kids.

“I thank you because you immediately adhered to my desire to see champions and coaches from various countries and different religions facing each other in a sporting match, to demonstrate fraternity and friendship,’’ Francis said in his audience with the players. “Tonight’s match will certainly be an occasion to collect funds and support, but above all to reflect on the universal values that football and sport in general can promote: loyalty, sharing, welcoming, dialogue, trust in the other. It’s about values which join every person regardless of race, culture and religious belief.’’

The two teams were named after Scholas Occurrentes - an educational entity launched by the pope - and Zanetti’s Pupi foundation.

Pupi, managed by Argentina Coach Gerardo Martino, recovered from two goals down at halftime to win 6-3.

Maradona played the entire 90 minutes and the highlight of the night was the Argentine legend’s delightful lob pass that set up Baggio’s goal. Baggio had earlier set up Juan Manuel Iturbe for the opener for Scholas.

Maradona is often called a sporting deity back home after leading Argentina to the 1986 World Cup title, having scored a goal against England in the quarterfinals that he famously credited to the “hand of God’’ after using his fist to push the ball into the net. He handed Francis an Argentina national team shirt before the game, and said he was awed by meeting the pope.

“Today two powers were brought together, the hand of God and that of the pope,’’ Maradona said. “Pope Francis is much more than Maradona. He is the real outstanding star. ... I grew apart from the church because I thought it wasn’t doing enough for the needy, but with Francis it’s different.’’

Pupi got back into the match with a penalty from former AC Milan great Andriy Shevchenko, who doubled his tally late on.

Paolo Maldini, Samuel Eto’o and Andrea Pirlo were on the bench, but did not play.

Lionel Messi had been scheduled to appear, but was forced to pull out after hurting his leg in Barcelona’s 1-0 win at Villarreal on Sunday.

An olive tree was planted before kickoff by religious figures from different faiths, while Zanetti, Eto’o, Shevchenko, Sulley Muntari and Baggio read a short speech about peace after the final whistle.