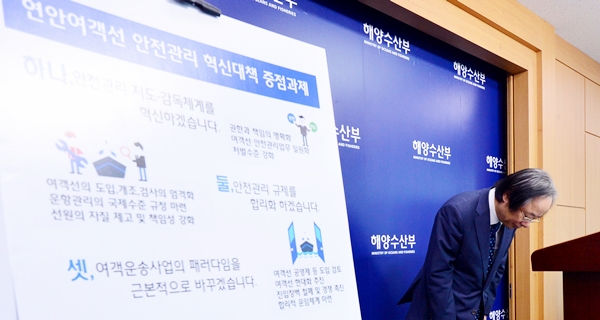 Oceans and Fisheries Minister Lee Ju-young returned to his office for the first time in 139 days for a briefing on plans to beef up safety measures for ferries and ships. He also apologized for the Sewol disaster, which took the lives of more than 300 passengers. [NEWSIS]

The government announced yesterday that it will limit the age of all passenger ferries to 25 years in its first concrete step in response to the sinking of the Sewol, which left more than 300 people dead or missing.

The Ministry of Oceans and Fisheries said yesterday that the government will also share the right to conduct safety inspections on local ships with foreign institutions.

Currently, ferries are allowed to operate for as many as 30 years.

By law, the maximum will be reduced to 20 years, but a five-year extension may be allowed if the vessels pass annual inspections. Additionally, the government banned the remodeling of ferries, which has the potential to compromise their stability.

The remodeling of the Sewol ferry to accommodate an additional 100 passengers was thought to be one of the primary contributors to the accident. The Korea Register of Shipping and the Korea Ship Safety Technology Authority previously held the exclusive right to inspect local ships.

Those agencies were blamed for lax safety inspections. Countries that have already granted inspection rights to Korea will be selected as inspection partners.

The Oceans Ministry will also take back responsibility for ferry operations and safety, which had been handed over to the Coast Guard.

The government will lower barriers for entering the maritime industry to encourage fair competition, easing rules on freight rates and allowing ferry operators to adjust fares in line with fluctuating fuel costs to help turn a profit.

Oceans and Fisheries Minister Lee Ju-young held a briefing yesterday at Sejong City after spending 139 days at Paengmok Harbor, in Jindo, South Jeolla, where he had been staying with the relatives of the Sewol ferry victims until recently.

“These plans won’t be perfect, but we’ll keep upgrading them,” Lee said, “so the Sewol tragedy will become the last maritime accident in history.”