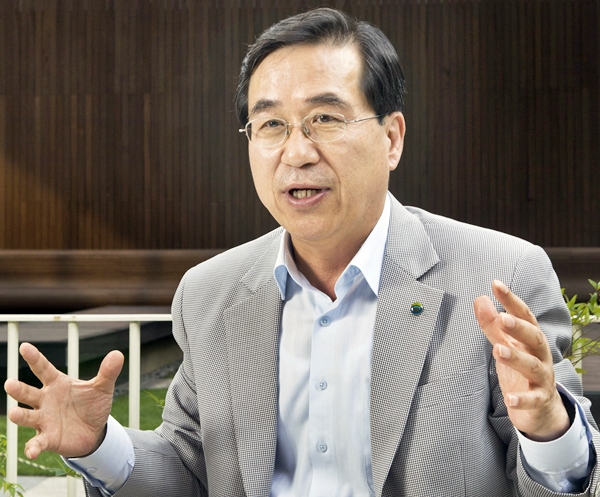 Following the success of rapid economic development in the post-war era, Korea has remained divided over environmental issues.

While environmentalists push for a change in direction to pursue sustainable development, growth-oriented individuals have expressed concerns that such moves may force the country backwards.

But according to Lee Si-jin, the president of Korea Environment Corporation (KECO), now is the time to raise Korea’s international profile and become more environmentally friendly. Those efforts, he added, must start with overseas projects aimed at building efficient infrastructure and sharing knowledge and awareness.

The 58-year-old was tapped last May to head the company, which is tasked with carrying out environmental policies by the Ministry of Environment.

Before that, he worked as an environment engineering professor at Kyonggi University and was involved with the Korean Society of Environmental Engineers. He also served as a consultant to the Ministry of Environment and KECO.

The state-run organization has jointly participated in projects in more than 10 countries, including the construction of a photovoltaic power plant in Mexico and waste incineration plants in Costa Rica and Peru.

The Korea JoongAng Daily recently sat down with Lee to discuss ongoing projects and the organization’s future. The following is an edited portion of the interview:

Q. What types of overseas projects have the Korea Environment Corporation undertaken?

A. KECO believes that overseas bidding and other cooperation is imperative.

We have carried out different initiatives across the world, but our focus has so far been on less developed countries, which find it hard to develop decent infrastructure. Through a series of projects, KECO has not only helped these countries manage waste more efficiently and become more eco-friendly, but also contributed to enhancing Korea’s image.

For example, we signed a memorandum of understanding (MOU) with Colima, in Mexico, to establish a photovoltaic plant. After the agreement, other Latin American cities and countries also contacted KECO to discuss the construction of renewable energy plants there.

What are some other projects?

When it comes to the environment, each country has different concerns and interests. Countries like Myanmar, Indonesia, China and Vietnam suffer from water shortages and pollution. For these countries, we help build facilities that can improve water quality.

Oil rich countries in the Middle East prefer to hire consultants so that they can apply that advice to their policy-making. Many African countries are beset with multiple environmental problems but don’t have any funding or resources to solve these issues. So, in these cases, we often cooperate with international organizations to secure funding to carry out projects. One remarkable achievement is an ongoing project in the Republic of the Congo.

We received funds from Water and Sanitation for Africa, an environment organization dedicated to ensuring easy access to clean drinking water in Africa. KECO is working to establish such facilities in an effort to provide sanitized water to Congo. In June, we also made inroads into Columbia with the help of the Korea International Cooperation Agency to help the country set up [an] air environment monitoring system. The project is estimated to be worth 2 billion won ($1.964 million).

What are KECO’s strengths when it comes to advising and leading environmental projects abroad compared to other agencies?

One of KECO’s strengths lies in its cost effectiveness. I believe that [our] technology and service quality is comparable to that of other advanced countries in Europe and the United States, but we provide services much cheaper than those countries.

Besides the construction of plants, what are some other activities in which KECO is involved?

KECO is also very interested in training high-ranking officials to teach them how to operate and maintain those power plants and facilities. It is not ideal to only construct facilities and then leave, because locals have no idea how to manage the system. We regularly invite civil officials to Korea for training sessions. Some sessions concentrate on different areas - for example, environmental pollution, air quality improvement and renewable energy.

Officials from less developed countries can choose the session. From 2006 to 2013, we invited more than 700 officials from 74 countries. The majority were in Southeast Asia and Latin America.

Although Korea’s renewable energy technology has developed significantly, many European countries, Japan and the United States are considered leading players in the field. What can Korea learn from them?

The biggest difference between advanced countries and Korea is that these countries have the core technology required to use renewable energy sources. …We still lag behind. So, I believe Korea, as well as KECO, has a lot to learn from those countries.

As part of efforts to emulate more advanced technology, KECO initiated a collaborative research project with the Energy Research Center in the Netherlands. We will jointly build an air-quality monitoring system. In the process, I believe the two institutes can learn from each other.