With Di Maria, it’s like old times at Old Trafford

With Di Maria, it’s like old times at Old Trafford 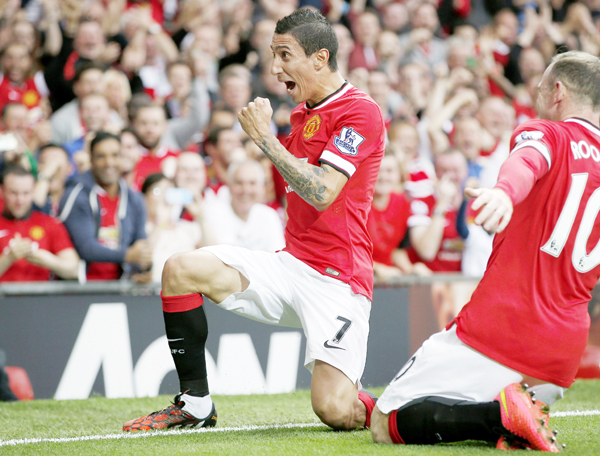 After a summer spending spree of $250 million, the good times just might be on their way back for Manchester United.

To the backdrop of fans chanting “We’re going to win the league,’’ United beat the Queens Park Rangers, 4-0, on Sunday to end its winless start to the Premier League season with a result and performance that may be seen as the true beginning of the Louis van Gaal era.

The brilliant Angel Di Maria and Ander Herrera scored their first goals for United, Wayne Rooney added a third before the break and Juan Mata also found the net to give van Gaal his first win in five competitive matches in charge.

All that was missing for the home crowd that rediscovered its full voice was a goal for Radamel Falcao. He came on as a substitute in the 67th minute for his debut in a season-long loan from Monaco that is costing a reported $25 million in salary and fees.

The Colombia striker was presented with a great opportunity from close range with seven minutes remaining, but his shot was blocked.

Still, with the goals flying in elsewhere and the team showing more pace and intensity, it was like the old times.

“I said to the players before the match, ‘We have to make a new start today,’’’ van Gaal said.

The victory lifted United to five points from four league matches and could make van Gaal think again about his deployment of a 3-5-2 formation.

Against Harry Redknapp’s QPR, a team that offered very little and is likely to be in a relegation fight come May, van Gaal reverted to a 4-4-2 and some confidence seemed to return to the players as a result. Left back Marcos Rojo and holding midfielder Daley Blind made solid debuts and in Di Maria, van Gaal has a player who could light up the Premier League this season.

The Argentina winger crucially broke the deadlock in the 24th when his free kick evaded everyone in a crowded area and bounced into the far corner, leaving goalkeeper Rob Green rooted to the spot.

And from one of Di Maria’s many surges that quickly turned defense into attack, Herrera ended up making it 2-0 in the 36th. Rooney collected a pass from Di Maria, had a shot blocked and laid the ball off for Herrera to drive a bobbling effort into the corner.

After Rooney shot home low from the edge of the area for the third goal in the 44th, Di Maria was the architect of the fourth just before the hour, with his driven shot arriving at the feet of Mata and the Spain playmaker afforded time and space to lift a finish high into the net.

“Can you do better when you prepare three goals and [score] one? It is nearly impossible,’’ van Gaal said of Di Maria.

A visiting defense that included Rio Ferdinand, who left United in May after 12 years, fell apart after Di Maria’s goal in the face of wave after wave of attacks.

Ferdinand received a warm ovation during the warm-up and a memento from United great Bobby Charlton before kickoff, but this was not an afternoon the veteran center back will remember fondly.

As Mata was scoring, United’s fans were giving Falcao a standing ovation as he trotted out of the dug-out to loosen up. Within eight minutes, he was on the pitch.

Falcao almost scored, too, pouncing on a parried save from Green off Blind’s low drive but seeing his first-time shot saved by the goalkeeper.

“We are building a process and we have to play in a certain style,’’ van Gaal said. “At the end, I hope to be manager of the champion of the Premier League. If it is not this year, then in my second year or my third year.’’