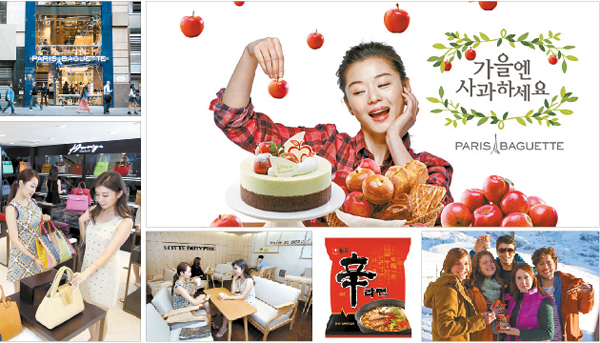 According to the NBCI survey conducted by the Korea Productivity Center (KPC) and the JoongAng Ilbo, 49 out of 59 industries scored higher than last year. The others were either new or received the same score from last year. 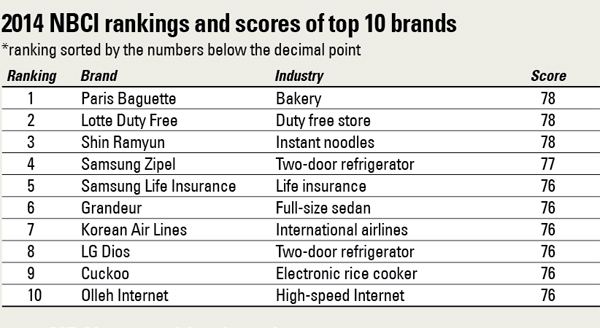 In the manufacturing sector, kimchi refrigerators and tablet PCs scored the highest, followed by instant noodles. In the services sector, duty-free shops scored the most points, followed by after-school programs.

Within each industry, the difference in scores among brands in the top three spots has reduced. The reduction may be attributed to the variety of choices now available to consumers because of better economic conditions, KPC said. The analysts predicted that competition within each industry will become even more fierce.

KPC advises companies to start taking on different marketing strategies. Most brands are currently concentrated on providing economic merit to consumers by lowering the price of their products and holding promotional events. However, the price-cutting race cannot lead to positive impressions on consumers. As consumers judge products by many factors, companies should focus more on improving the overall quality of their products. 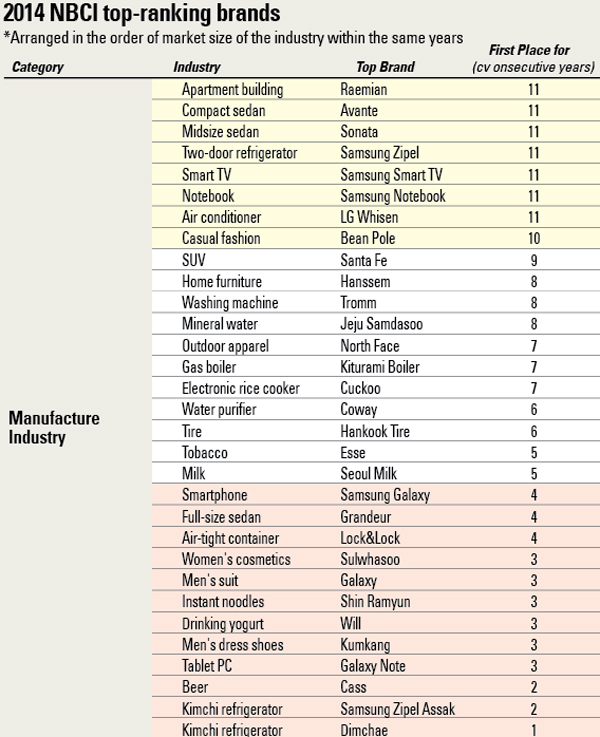 The smaller score differences within each industry indicate that rankings can change any time depending on what marketing strategy each company chooses. KPC predicts that companies with fundamental values such as good-quality products will take the lead in the future.

Paris Baguette, the bakery chain that ranked No. 1 this year, provides its customers with not only delicious but healthy baked goods from its 3,200 shops in Korea. The company’s quality management starts from culinary fundamentals, such as using the best ingredients. A memorandum of understanding (MoU) with 10 farms allows the bakery to bake breads and pastries with seasonal farm produce such as strawberries from Sancheong, South Gyeongsang, and mini-apples from Yeongcheon, North Gyeongsang.

Recently, new products with premium ingredients such as the cheese garlic baguette made with garlic from Uiseong, North Gyeongsang, reached 200,000 in sales in a month and the company’s pure milk cake rose to be the No. 1 seller among all Paris Baguette cakes.

The bakery brand is also serving overseas customers in its 180 stores in China, the United States, Singapore and Vietnam. Last July, the company opened its first store in France near the Chatelet subway station, located in the heart of Paris. The company plans to expand to other European countries in the near future. 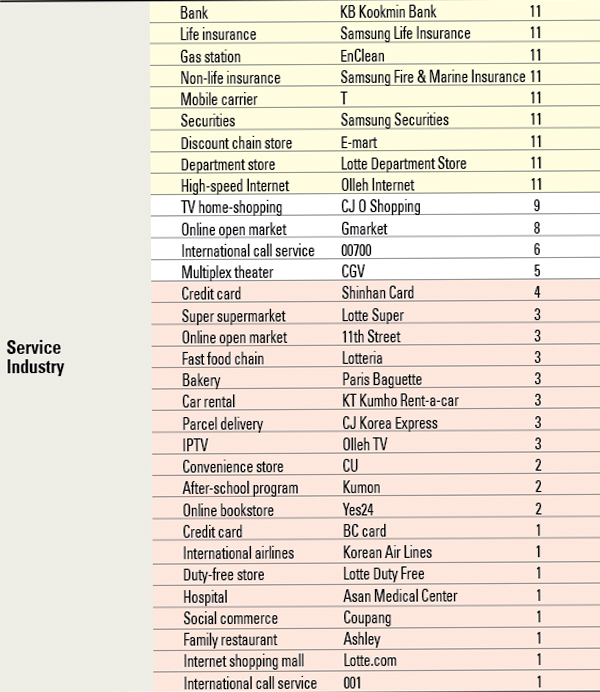 “Whereas the past Paris Baguette introduced France’s bakery culture to the Korean public, the future Paris Baguette will introduce our own baked goods to Paris and to the world,” said a company official.

Lotte Duty Free Shop, second in NBCI rankings, renovated its main store in Sogong-dong, central Seoul, to enhance the quality of customers’ shopping experience. The renovated space, which was constructed in five months and cost 20 billion won ($19.3 million), greatly improved the quality of the shops and accommodations. An additional 1,500 square meters (1,794 square yards) in the store has made the main store the biggest downtown duty-free shop in Korea.

The main reason for the renovation was the huge increase in visitors from China. Bigger spaces and extra escalators were installed to reduce jamming inside the building. Also, the shops on the ninth floor have been rearranged for better circulation.

Since its launch in 1986, Nongshim’s Shin Ramyun, which ranked third, concentrated on creating a spicy and savory instant noodle soup for Korean taste buds. The product was very successful, earning 3 billion won in the first three months of sale. In the following year, it made 18 billion won in sales and remained at the top ever since.

Its popularity is not limited inside Korea. The cafeteria inside the observatory on top of Jungfrau, Switzerland, stocks Shin Ramyun.

“Tourists from all around the world are looking for Shin Ramyun black cup because of the advertisement with Psy,” said Soche, the manager of the mountain-top cafeteria.

To reach further out to the world, the company broke down religious boundaries. From 2011, Nongshim began producing halal Shin Ramyun and exporting it to nine Islamic countries including Indonesia, Saudi Arabia, Qatar and UAE. Its performance in the Islamic market was successful from the first year, selling around 700,000. The first half of this year, the halal noodle’s sales have rose to $1 million.

According to Nongshim, Shin Ramyun’s fame was not made in a day. It attracted numerous consumers from 80 countries through continuous endeavors to keep its quality high.

“From the top of Jungfrau, Switzerland, through the Himalayas and to the southernmost of America, Shin Ramyun’s food diplomacy is expanding further into the world,” said a Nongshim official.