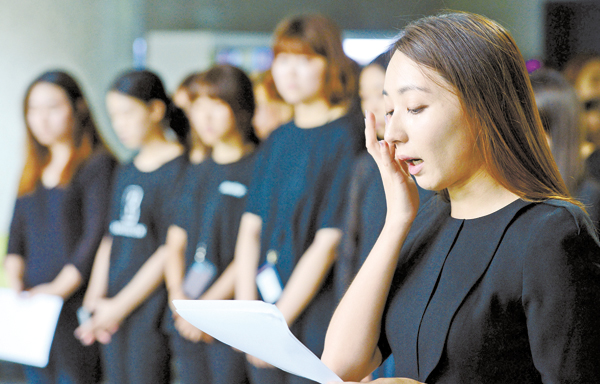 A group of students at and graduates of Sookmyung Women’s University are demanding two professors be dismissed for misconduct and abuse. [NEWS1]

A group of students at and graduates of the Department of Composition at Sookmyung Women’s University in Seoul held a conference yesterday demanding that the school fire two professors they claim verbally abused and acted inappropriately toward students.

The conference by an “emergency measures committee,” consisting of some 30 students and graduates, came two weeks after they initially disclosed a string of misconducts allegedly committed by the two teachers, surnamed Yoon, 49, and Hong, 57.

The students have been boycotting classes since Sept. 1, the beginning of the fall semester, in protest against the two accused.

“We strongly urge the university to dismiss Yoon and Hong, who routinely make unreasonable demands and use intemperate language against students,” a committee representative said during the conference, held in College of Music’s main lobby. “Students giving up music due to human rights violations should never happen,” the representative added.

More than 400 students, graduates, parents and even some of the school’s administrative staff have so far offered signatures online in support of the students’ cause.

Collective action by students against individual professors is a rarity in Korea, where respect for one’s higher-ups and seniors is considered virtuous.

The group also elaborated on various incidents it insists backs up its claims, and committee members cited one episode in which Yoon was supposed to give private 50-minute lessons to individual students, but instead had 10 students gather at a time, during which he spent five minutes with each.

According to the students, Hong also referred to some of his students as “human garbage,” describing them as inferior to those at Yonsei University and Ewha Womans University.

Others claimed the professor was verbally abusive.

“When a student failed to submit the homework, he would say, ‘Why can’t you compose at night? Do you do a night job [an indirect allusion to prostitution]?’” the representative said.

Hong was also condemned for being habitually late for classes by more than 10 minutes.

The university said it is currently investigating the two professors based on students’ claims, and the two are currently banned from lecturing for the present semester.