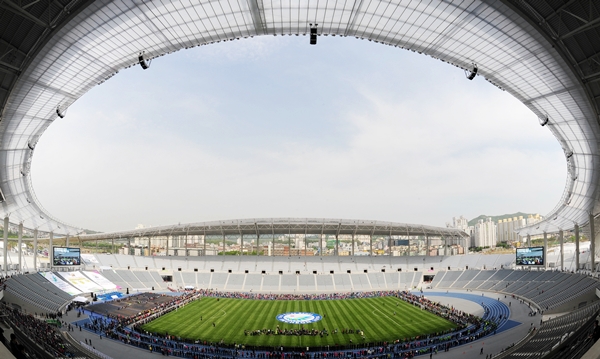 The 17th Asian Games get under way with a grand opening ceremony tonight in Korea’s western port city of Incheon.

The 16-day competition with the slogan “Diversity Shines Here” is Asia’s biggest sporting event. All 45 member countries of the Olympic Council of Asia (OCA), including North Korea, will participate, with about 15,000 athletes and staff. A total of 439 gold medals will be awarded in 36 events, including swimming, baseball, football, taekwondo, wrestling and track and field.

Korea’s 831 athletes aim to make five consecutive second-place team finishes by winning at least 90 gold medals. China is expected to win its ninth consecutive Asian Games, with Japan challenging Korea for second. The goal for North Korea is to win at least 10 gold medals and finish in the top 10.

The four-hour opening ceremony begins at Incheon Main Asiad Stadium at 6 p.m. under the theme “Unity Is Asia ? Dream of 4.5 Billion People,” with movie directors Im Kwon-taek and Jang Jin in charge. Former MBC anchor Kim Sung-joo and KBS anchor Yoon Soo-young will be the emcees. The ceremony consists of five parts and starts with a welcoming ceremony that greets every participating nation. A pungmul-nori, a traditional folk performance that includes singing, dancing and drumming, will be staged, and K-pop stars and actors such as Psy, JYJ, Jang Dong-gun and Kim Soo-hyun will take part.

Athletes and staff from each nation will enter the stadium at about 8:30 p.m. Nepal will lead, with North Korea coming in 30th and South Korea entering last. Kim Young-soo, chairman of the Incheon Asian Games organizing committee, will deliver a welcome speech, before President Park Geun-hye declares the 2014 Incheon Asian Games open.

The goal of Korea’s national team is to win gold in the Asian Games for the first time in 28 years, and the team got off to a good start by defeating Saudi Arabia, 1-0, on Wednesday, after dominating Malaysia, 3-0, on Sunday. Korea is alone at the top of Group A with two wins and six points. But fans can’t be happy that two key attackers - 196-centimeter (6-foot-4) striker Kim Shin-wook and midfielder Yun Il-lok - left the match against Saudi Arabia in the first half with injuries. Kim is expected to rejoin the team in the next few days. Yun’s return is less certain after pulling a ligament in his right knee, and he is scheduled for an MRI exam, the Korea Football Association said yesterday.

Laos, Korea’s final opponent, is considered the weakest country in Group A, so the Taegeuk Warriors are a virtual lock to win the group and face the second-place finisher in Group B - Uzbekistan, Hong Kong, Bangladesh and Afghanistan - in the Round of 16. Korea’s biggest obstacles to gold are Uzbekistan, Japan, Iran and North Korea.

Again, the spotlight is on the rivalry between “Marine Boy” Park Tae-hwan of Korea and Sun Yang of China. They will face each other in the 200-meter, 400-meter and 1,500-meter races. At the 2014 Pan Pacific Swimming Championships in Australia in August, the 25-year-old Park was on track for gold in Incheon, winning the men’s 400-meter freestyle in 3:43.15. He has won six gold medals in two Asian Games appearances and is aiming for his third consecutive victory in the 200-meter and 400-meter freestyle.

The Chinese swimming icon who won gold medals in the 400-meter and 1,500-meter freestyle at the 2012 London Olympics showed his confidence in a TV commercial and by sending messages in Korean to Park, one of which said, “My dear Mr. Park, would you give me a swimming lesson at Incheon?”

Park also will compete in the 100-meter freestyle, 200-meter/400-meter individual medleys and 800-meter relay. Besides Yang, Park will be challenged by Kosuke Hagino of Japan. 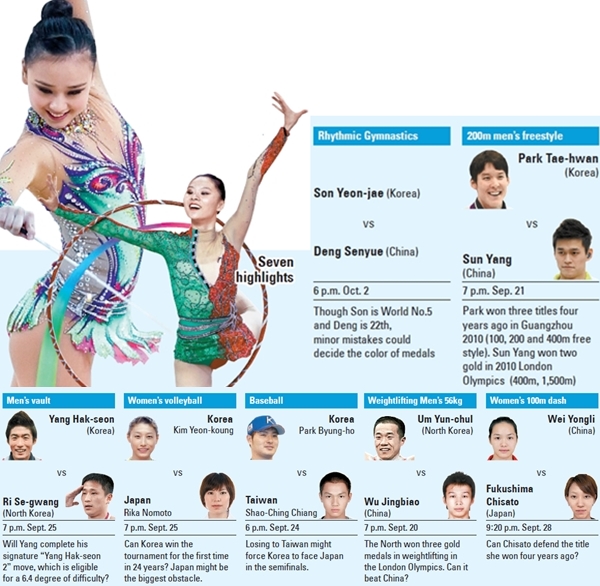 
Korea’s baseball team won the gold medal in the 2010 Guangzhou Asian Games, and it obviously wants to make it two in a row on its home turf.

The national team led by the Samsung Lions manager, Ryu Joong-il, emphasizes hitting. With first baseman Park Byung-ho (.312/48 home runs/111 RBIs) and shortstop Kang Jung-ho (.360/38 home runs/107 RBIs) of the Nexen Heroes, Korea wants to score as many runs as possible for a pitching staff that has thrown all season for their Korea Baseball Organization teams.

The most reliable arms are SK Wyverns ace Kim Kwang-hyun (12-9/3.39 ERA) and Kia Tigers lefty Yang Hyun-jong (15-7/4.27 ERA). One of them is expected to start against Taiwan in the Group B preliminary on Wednesday.

Korea is keen to beat Taiwan, since a loss would increase the likelihood of facing Japan in the semifinals.

In the Federation Internationale de Gymnastique Rhythmic Gymnastics Dundee Cup in August, Son won bronze in the individual all-round with a total score of 70.25 points: 17.55 points in hoop, 17.55 points in ball, 17.35 points in clubs and 17.6 points in ribbon. In April, she became the first Korean rhythmic gymnast to win an individual all-around gold medal at a senior-level World Cup event.

Her biggest rival will be China’s Deng Senyue, who finished fourth in last year’s world championships, where Son was fifth. But in the Dundee Cup, Deng was seventh with 68.15 points.

“Since small mistakes could make a big difference, Son needs to stay focused during her performance,” said analyst Cha Sang-eun.

Away from the spotlight

While popular athletes in major sports grab most of the attention from the media and public, many competitors in more obscure events are primed for the Games.

One of them is Kabaddi, a traditional sport based on wrestling that originated in India. Korea’s first appearance in Kabaddi was four years ago, and there are still only about 100 competitors in the entire country, most of them physical education teachers and office workers. No matter whether they have fans or not, they have been working to get better and won a bronze medal at last year’s Asian Indoor & Martial Arts Games in Incheon.

“Our goal is to win one medal at Incheon,” said the team coach, Cho Jae-ho. “I heard that most other teams practice three times a week, but the only day we take a break is Monday.”

Cricket is a popular sport in England, but not so much in Korea. The women’s national cricket team was established last year and will face its biggest challenge so far in Incheon. Cricket was selected as an official event in 2010 at Guangzhou, but Korea didn’t send a team. The women’s cricket team comprises former golfers and softball players, and even housewives.

“My family helped me and encouraged me so much for the Incheon Games,” said Jun Soon-myung, 46. “I’m very excited since this is my first international competition and I want to at least win one game.”

The youngest Korean player at the Incheon Games will be 13-year-old yacht optimist Kim Da-jung; equestrian athlete Jeon Jae-sik, 47, will be the oldest. For Korean basketball star Kim Joo-sung of Dongbu Promy, Incheon will be his fifth straight appearance at the Asian Games.