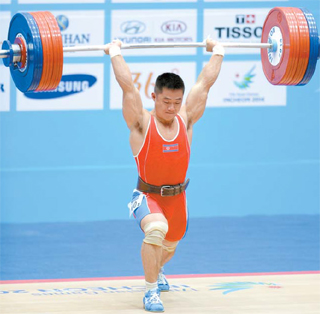 Kim Un-guk of North Korea lifts 178 kilograms (392 pounds) in the clean-and-jerk during the men’s 62-kilogram weight lifting on Sunday in Incheon. North Korea has set four world records in weight lifting in the 2014 Games. [NEWSIS]

A population of 4.5 billion people are represented at the Asian Games, but the standards this year have set the bar higher than before. Since the 2014 Incheon Games officially started on Saturday, 11 world records have been set in four days, 10 in weight lifting and one in shooting, with about 80 percent of the competition still to go. A total of 15 Asian records have been broken in Incheon. By comparison, only three new world records were set in the 2010 Guangzhou Games.

Surprisingly, the athletes leading the record-breaking performances are North Koreans, with four weight lifting records. On Sunday, Kim Un-guk won the men’s 62-kilogram (136.7 pound) weight lifting event by breaking the world record in both the snatch and total weight, lifting a total of 332 kilograms to smash his own world record by 5 kilograms. A day before, Om Yun-chul claimed gold in the men’s 56-kilogram event and set a world record in the clean-and-jerk (170 kilograms).

The two don’t look like they can lift as much weight as a real-life Hercules. Om, 152-centimeters (4-foot-11) tall, is the smallest lifter in the world.

They have thrilled each audience that has seen them perform and attracted attention from the media, as it is nearly impossible to get an idea of what its like to live in North Korea. The Incheon Organizing Committee held a press conference at the Main Press Center on Tuesday to give media outlets a chance to hear the weightlifters’ stories directly. Reporters including the Korea JoongAng Daily expected to hear some stories like how they trained themselves, maybe how they developed their biceps, which look Thor’s in the movie “Avengers,” and what motivated them to become a lifter. But reporters couldn’t suppress their laughter as the two lifters - Kim and Om - spoke for about 15 minutes in an interview that was focused more on politics than sports.

When reporters asked them to tell the secret to their golden performances, Kim said, “We have been trained under a strong Juche [self-reliance] ideology that our dear leader Kim Jong-un emphasizes all the time.”

Reporters soon realized that the two were only there to propagate the idea of that the North’s sports system has improved under young leader Kim Jong-un. During the interview, Om suddenly asked the reporters a question: “Please raise your hand if you think it is possible to break a rock by hitting it with eggs,” he said. When no one raised their hand, Om started praising his ruler as if on cue: “People say it is impossible to break a rock with eggs, but with our leader’s great love, support and the ideology that made us mentally strong, we proved that nothing is impossible.”

When reporters asked them to recall the toughest moment during their training, Kim said, “Training is always painful, but we were able to overcome everything because our great leader took care of us very well. We are very happy to deliver such good news to our nation.”

As reporters tried to ask more questions, they rushed to end the conference, saying “Let’s finish this,” then left.